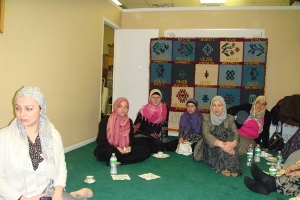 Author: Uzeir Ramic — On Thursday March 19 the Bosnian Herzegovinian Islamic Center New York, in Astoria, hosted a panel discussion titled the “Carpet of Remembrance on the Victims of Genocide – Tradition Against Oblivion”.

The president of the Bosnian Herzegovinian Islamic Center New York, Vahid Durmic opened the evening by welcoming and informing our visitors of the weekly activities at the mosque. As well as acknowledging our musafire (traveling guests) Ahmedin ef. Mehmedovic, imam of the Bosnian Islamic Association of Utica in Upstate New York, Nermin Duric and Mirnes Mustafic, board members of the Bosnian American Islamic Cultural Cetner of Hartford in Connecticut. Afterward Uzeir Ramic, board member of the Congress of North American Bosniaks took over as moderator for the evening and introducing our paenl guests:

Munira “Beba” Hadzic – Director and Founder of BosFam (Bosnian Family).
Prior to the war in Bosnia and Herzegovina, Beba was a teacher at the Srebrenica Primary School. After seeking refuge in Tuzla during the war, Beba approached the relief agency Oxfam to begin the pilot weaving project which is BOSFAM today. Beba has consistently been a devoted advocate of the displaced from Srebrenica, as well as the victims of the tragedy.

Alison Sluiter – Outreach Coordinator Advocacy Project
Graduated from the prestigious Georgetown University in May of 2008 with a B.S. in Foreign Service. While at Georgetown, she majored in Russian, Central Asian, and East European Studies. Ms. Sluiter is working with The Advocacy Project as an Outreach Coordinator, focusing on the Srebrenica Memorial Quilt and plans on visiting the Woman of BosFam this summer in Bosnia & Herzegovina.

Following a video presentation, Munira Hadzic spoke about BosFam, an organization that was envisioned to answer the problems of our widowed mothers, who were victims of genocide. They came from various cities, chased out of their domicile, with young children and elderly relatives to refugee centers towards the latter part of 1993. With the assistance of Oxfam, an organization based in the United Kingdom the seed was planted for what was to become BosFam. The creation of knitting centers for displaced women and victims of genocide was a place where women could seek refuge. With the increased attacks on Bosnia & Herzegovina, many of the women asked “What if Oxfam leaves?” Oxfam withdrew in 1994 leaving the women war victims to draw on their strength and faith. The collective voice was “We have no where else to go, we must continue, we need to help our children, our elderly and ourselves. We have no other option”.

At this point the decision was made to establish BosFam, (short for Bosnian Family) as a non governmental organization. Munira Hadzic continued her selfless service to the women war victims while being a vocal spokesperson for BosFam. The sewing, quilting and weaving proved to be a great source of occupational therapy, allowing the women to heal, even if it was for just a moment. The women of BosFam worked on various projects making sweaters, scarves, wool socks, gloves and other hand crafts. The hand works of our heroes – the women war victims continued working as a way to earn a source of income, so that they could help provide for their hungry families and others. Munira said “Weaving carpets, for many, was the best therapy. The only time they stop thinking of their misfortunes is when they are weaving”.

The BosFam project “Carpet of Remembrance on the Victims of Genocide – Tradition Against Oblivion” will be made up 20 smaller (approximately 16 inches by 16 inches) carpets each with a name of one of the victims of Srebrenica genocide. The goal of this project is to weave a carpet for each of the 8,000+ victims. These carpets are to be installed in genocide museums in Srebrenica and Potocari, throughout Bosnia and Herzegovina, Australia, America and Europe. Only this way will we never forget the tragedy of Srebrenica, the rape of Bosnia and Herzegovina, that our neighbors committed towards us while the rest of the world watched.

The Bosnian Herzegovinian Islamic Center New York has sponsored an entire carpet with 20 names. This rug will be displayed in our mosque to remind our members and visitors, of the genocide that occurred, so that the victims are never forgotten.

If you would like to obtain more information on how to sponsor a panel or to donate, please feel free to contact BosFam in Tuzla, Bosnia and Herzegovina at the below: