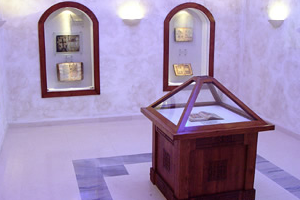 In 1991 the book was appraised for a value of $700 million, although to many, it is priceless, according to San Diego Jewish Journal.

The manuscript is owned by the National Museum of Bosnia and Herzegovina in Sarajevo (link), where it is on permanent display. It is handwritten on bleached calfskin and illuminated in copper and gold. It is the oldest Sephardic Haggadah in the world, which originated in Barcelona around 1350, and had survived many close calls with destruction. Historians believe that it was taken out of Spain by Spanish Jews who were expelled by the Alhambra Decree in 1492. Notes in the margins of the Haggadah indicate that it surfaced in Italy in the 1500s. It was sold to the National Museum in Sarajevo in 1894 by a man named Joseph Kohen.

During the Bosnian War of the early 1990s, when Sarajevo was under constant siege by Bosnian Serb forces. This time, it was saved in a dramatic fashion.  The hero was Dr Enver Imamović, the director of the Museum, who, together  with several brave policemen and members of the territorial guard, rescued the Haggadah from the Museum, which was on the front line, and transferred it to the vault of the National Bank.

Afterwards, the manuscript was restored through a special campaign financed by the United Nations and the Bosnian Jewish community in 2001, and went on permanent display at the museum in December 2002.

Recently, the museum has authorized the publication of a limited number of reproductions of the Sarajevo Haggadah, each of which has become a collector’s item. In May 2006, a Sarajevo publishing house Rabic Ltd., announced the forthcoming publication of 613 copies of the Haggadah on handmade parchment that attempts to recreate the original appearance of the 14th century original.

There is a brief mention of the manuscript in the motion picture, “Welcome to Sarajevo”. The book “People of the Book” by Geraldine Brooks creates a fictionalised version of the history of the Haggadah from its origins in Spain to the museum in Sarajevo. The winter 2002 issue of the literary journal Brick published Ramona Koval’s account of the disputes surrounding the proposed UNESCO-funded display of the original Codex in the context of the post-Dayton Agreement UN-supervised 1995 peace settlement.

The history of the remarkable man, Dervis Korkut, who saved the book from the Nazi officers who sought it, was told in the December 3, 2007 issue of The New Yorker magazine. The article, entitled “The Book of Exodus”, also by Geraldine Brooks, sets out the equally remarkable story of the young Jewish girl, Mira Papo, whom Korkut and his wife hid from the Nazis just as they acted to save the Haggadah. In a twist of fate, as an elderly woman in Israel, Mira Papo secured the safety of Korkut’s daughter from the Serb aggression on Bosnia-Herzegovina during the 1990’s.