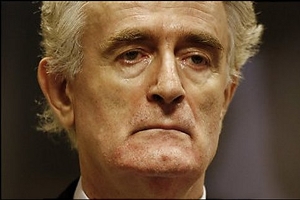 Judges at the International Criminal Tribunal for the Former Yugoslavia (ICTY) confirmed Monday a new streamlined indictment against former Bosnian Serb leader Radovan Karadzic that includes two genocide counts instead of one.

The new indictment covers the same allegations as the existing charge sheet but reduces the number of crime scenes from 41 to 27 in an attempt to speed up what is expected to be a lengthy trial. Karadzic was first indicted in 1995, together with his former military chief Gen. Ratko Mladic, for masterminding Serb atrocities against Bosniaks and Bosnian Croats during Bosnia’s 1992-95 war.

According to Monday’s decision, the first genocide count covers ethnic cleansing campaigns throughout Bosnia and the second refers to the July 1995 Srebrenica genocide where Serb troops and paramilitaries rounded up and murdered at least 8,000 Bosniak men, children, and elderly. The mass summary execution at the Srebrenica U.N.-protected “safe haven” in eastern Bosnia was the worst single massacre on European soil since World War II.

Karadzic will be asked to enter pleas to the new indictment at a Feb. 20 hearing. He faces a maximum sentence of life imprisonment if convicted.

He refused to enter pleas when he was brought before the tribunal’s judges last year after his arrest on a Belgrade bus in July ended 13 years on the run from international justice. The court entered not guilty pleas on his behalf. No date has yet been set for his trial to begin.

Karadzic had appealed to judges to further cut down his indictment or risk a drawn-out case like that of his political mentor former Yugoslav president Slobodan Milosevic, whose trial lasted more than four years before being aborted when he died in his jail cell in 2006.

“This is the Tribunal’s first and best opportunity to demonstrate that it has learned the lessons of the Milosevic trial,” Karadzic wrote in a motion. “By approving only a limited amended indictment, the Trial Chamber will promote the interest of a fair and expeditious trial for all concerned.”

But in approving the new indictment, trial judges said they were satisfied the changes, “will not have an impact that could be considered significant upon the accused’s right to be tried without undue delay.”