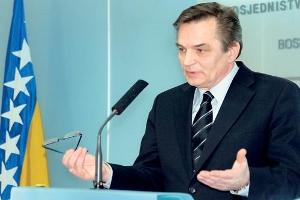 By Viola Gienger and Ken Fireman – Bosnia’s only wartime politician active in its highest rungs of government called on President Barack Obama to recommit U.S. influence and experience to break the stalemate in the Balkan nation.

The Obama administration has the influence and the values needed to correct the weaknesses and the violations of the U.S.- sponsored Dayton Peace Accords that ended the 1992-1995 conflict, said Haris Silajdzic, the Bosniak member of the country’s three-person presidency.

Obama probably understands the kind of segregation, ethnic cleansing and human-rights abuses Bosnians have experienced, and Secretary of State Hillary Clinton’s husband helped end the war, Silajdzic said in an interview in New York yesterday. “It can be fixed if the U.S. government re-engages to protect its political investment” and helps “the Europeans and all of us to make it right,” Silajdzic, 63, said. “It’s in the interests of the United States to have a stable normal democracy in Bosnia-Herzegovina.”

The Dayton agreement, negotiated by now-U.S. special representative to Afghanistan and Pakistan Richard Holbrooke, left the former Yugoslav republic divided between two entities, one predominantly Serb and the other Bosniak-Croat, that operate separate governments, police and courts. Those two authorities have more power than a jointly run military, federal parliament and a three-person presidency.

Many of the country’s schools are still ethnically segregated, and the predominantly Serb entity declared twice last year that it has the right to secede.

The Dayton accord was “unjust” and never fully implemented as intended to restore the multi-ethnic society that existed before the war, Silajdzic said. “So what we have there now is legalizing of the ethnic cleansing and genocide,” he said.

The Obama administration includes appointees who also worked under President Bill Clinton and are familiar with the issues in Bosnia, Silajdzic said.

He suggested a U.S. special envoy or delegation focusing on the Western Balkans could apply the energy and influence needed to move Bosnia forward politically and economically.

The political stalemate is a drag on Bosnia’s economy, Silajdzic said. The central government can’t make many decisions that cross the entity boundaries, and businesses must maneuver within multiple layers of rules and regulations.

General Electric Co. “was interested in a project, a big dam project, 700 megawatts, in Bosnia, because we have the abundance of water and hydropower and also turbo power,” Silajdzic said, adding that energy is among the country’s valued exports.

The potential for Bosnia to join the European Union hasn’t been the incentive that the U.S. thought might spur a unified push for political and economic progress, Silajdzic said.

The EU, with the backing of the Bush administration, has tried to force agreements on Bosnia that would cement the ethnic divisions caused by the 1992-1995 war, he said.

“In translation, it means we are tired of you, you are not a priority, so let’s wrap it up in a nice paper and goodbye,” Silajdzic said. “It may be a short-term solution but it brings different problems.”

In the meantime, Silajdzic traveled to Libya earlier this week to seek financial aid. The global economic crisis has stalled foreign investment in Bosnia, shut off export markets and reduced remittances that Bosnians abroad send back to their families, he said.

The Libyans “are ready to create joint ventures with our companies but they are not ready to give us credits,” Silajdzic said. “They are ready to make deposits in our central bank or state-owned banks to strengthen our position.”

Still, economics is only part of what keeps the country down, said Diana Jenkins, who fled Bosnia when she was 19 and now owns several companies in Malibu, California. She is backing Silajdzic’s efforts to improve Bosnia’s image and attract foreign investment.

“Economics is not the most important because people suffered,” said Jenkins, who also funds a project at the University of California, Los Angeles, to help bring Balkan war criminals to justice. “They want closure, they want an apology, they want something.”

The Obama administration would have the credibility and heft to exert the necessary pressure and find ways to break the logjam, said Silajdzic and advisers who accompanied him on the U.S. trip.

“If the United States position is that the only stable solution in the western Balkans is to have a viable state of Bosnia rather than some sort of ethnic carve-up, then we have to make sure that the state is viable long-term,” said Elvir Camdzic, Silajdzic’s foreign policy adviser. “And the state we have now isn’t because it’s dysfunctional.”

As for Holbrooke, a former U.S. ambassador to the United Nations who is now coordinating U.S. diplomatic efforts to neutralize the terrorism threat in the border region of Afghanistan and Pakistan, Silajdzic said he has potential to find some diplomatic solutions there despite the complexity of the issues.

“You have to give him credit for being able to deal with tough problems in a straightforward way,” said Silajdzic, who represented the Bosnian republic at his country’s peace negotiations in Dayton, Ohio, in 1995. “I’m sure he will do his best, and sometimes he can do a lot.”