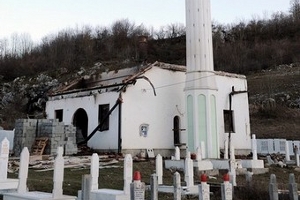 The Congress of North American Bosniaks (CBNA), an umbrella organization representing Bosniaks living in the United States and Canada strongly condemns the today’s attack against Bosniaks’ mosque in Fazlagica Kula near Gacko municipality during the most sacred holiday for Bosniaks, Eid Al-Adha.

This is not an isolated incident, as there have been many attacks on refugee returnees, attacks and vandalizing of mosques in RS, and threats to imams. Freedom to worship is one of the most fundamental rights in the free world and must be protected.

To add insult to injury, this mosque was also previously burnt in 1992 by Serbian paramilitary forces who ethnically cleansed almost every town and city where Bosniaks used to live in what is currently defined as RS. It was rebuilt by Bosniaks trying to return back to their destroyed homes and trying to reclaim their destroyed lives in RS.

The burning of mosques in Fazlagica Kula, coupled with previous attacks on mosques in Kotor Varos, Bosanski Novi, Banja Luka and elsewhere represent an open and direct provocation against the Bosniaks and are direct violation of European humanitarian law standards and respect for all people’s religious beliefs. These attacks are unprovoked and go unpunished by the RS Police which was, consequently, created as a result of the bloody ethnic cleansing campaign against Bosniaks in 90’s war. If this crime goes unpunished, it must be assumed that the government administration of the RS presents a clear and present danger to the national security of BiH and next steps must be discussed with an appropriate international delegation immediately.

Attacks on Bosniaks and mosques in RS must be stopped and those who commit such despicable crimes must be punished. These attacks have confirmed what CNAB has realized some time ago – that within RS there is no protection of Bosniaks who used to be the majority population, but were ethnically cleansed by Serbian paramilitary forces during the war and aggression in Bosnia.

We call for authorities in Bosnia and Herzegovina to provide full protection of Bosniaks in RS.

On behalf of the CNAB
Haris Alibasic
Spokesperson of CNAB