Skip to Content
Home English CNAB Response to the Ruling of the International Court of Justice (ICJ), Case of Bosnia vs. Serbia

It is disappointing that the Court did not accept the indisputable evidence that Serbia, at a minimum, was an active party to the planned project of genocide. 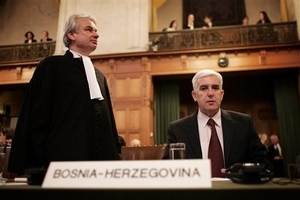 Congress of North American Bosniaks (CNAB) has taken note of the unjust and politically motivated decision of the International Court of Justice which was based upon extreme prejudice of the West against Bosniaks as European Muslims.

CNAB reiterates that Bosniaks were not the only victims of aggression and genocide, but rather, the whole of the multi-ethnic, multi-cultural and multi-religious matrix of the Bosnian and Herzegovinian society, embodied in the millennia of joint history, dignity in tolerance, respect, trust and coexistence, among all citizens of Bosnia and Herzegovina, regardless of their ethnic or religious background.

Genocide and aggression had also been used as tools to negate the will of the electoral majority of Bosnia and Herzegovina, which electoral majority, fifteen years ago today, chose the independent, sovereign and democratic future for Bosnia and Herzegovina. The unjust and politically motivated decision of the Court notwithstanding, CNAB calls upon all of the Bosniaks in the Motherland and in the Diaspora to rise above the rather justified frustrations, widely expected passivity, externally organized internal divisions and willfully imposed conditions for expressions of irresponsible behaviour, all of which, according to CNAB, was, indeed, the planned outcome of the Decision of the Court, in the hope that the international community would thus be able to finally complete the centuries? old project of absolute, and final, destruction of Bosnia and Herzegovina and her Bosniak and Bosnian social fabric. In these times of utmost historic responsibility bearing heavily upon the shoulders of the current generations of Bosniaks with respect to the future of the Bosniak nation, CNAB calls upon all Bosniaks and Bosniak organizations to join in the implementation of the plan of action of CNAB as follows:

The Court has ruled in its Decision that the self-proclaimed “Republika Srpska”, its leaders, agents and surrogates have committed genocide upon Bosniaks in Srebrenica, numbering in excess of 8,000 persons. Srebrenica was, at the time, the official “safe haven” of the United Nations. Serbia was, in that Decision, proclaimed guilty for not preventing and punishing the crime of genocide. It is disappointing that the Court did not accept the indisputable evidence that Serbia, at a minimum, was an active party to the planned project of genocide. The Decision of the Court, in and of itself, is a body of evidence that the constitutional arrangement based upon the ethno-territorial divides was directly attributable to genocide and, before that, to a planned genocide. That Decision, therefore, directs that the results of genocide be annulled. It is possible to achieve that only by way of creation of a new constitution which will bring about a system of democratic governing in harmony with the multi-ethnic character of Bosnia and Herzegovina which was in existence before the aggression and genocide, and which will require joint and synchronous action of all Bosniak organizations. CNAB has taken these positives within the context of the Decision and has adopted a plan of action on behalf of Bosniaks and their associations in response to the Decision of the International Court of Justice.