Skip to Content
Home English Congress of Bosniaks of North America expresses its utmost solidarity with the suffering of Syrian people, and the difficult circumstances of the refugees 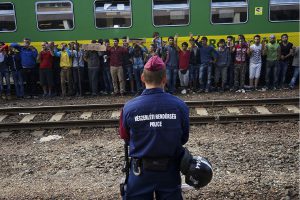 As representatives of more than 300,000 Bosniaks in United States of America and Canada, survivors of war and aggression on Bosnia and Herzegovina, Congress of Bosniaks of North America (CBNA) expresses its utmost solidarity with the suffering of Syrian people, and the difficult circumstances of the refugees (Syrians and others), who are forced to leave their homes to find peace and safety in the European Union countries.

Attentively following the happenings on the Greek-Macedonian and the Serbian-Hungarian borders, we are horrified and strongly condemn the behavior of Hungarian and Macedonian governments and police forces for their inhumane treatment of Syrian and other refugees. After the Hungarian authorities closed its borders entirely on September 15, 2015, we are concerned that the Croatian government might do the same,  due to the pressure of other surrounding European Union States, especially Hungary and Slovenia.  In case that the Croatian government closes its borders with Serbia, it is very possible that about 30,000 refugees might make their way towards Bosnia and Herzegovina, in hopes that through B&H they enter Croatia, making their way towards Northern and Western Europe. We are deeply concerned over the statement of Bosnian-Herzegovinian Minister of Security Dragan Mektic that B&H is only ready to take 5,000 refugees in case they decide to pass through the country on their journey to EU countries. Minstar Mektic, also said that in case the number of refugees passes the 5,000 quota, that B&H is ready to close its borders.

Despite the very grave economic and political situation Bosnia and Herzegovina is in, we strongly believe that the country and its people have and feel the moral obligation and duty to help the suffering refugees.  Besides being moved by the difficult situation the refugees are facing first and foremost as caring human beings, we are also deeply moved due to our own war and refugee experiences some two decades ago. Our citizens were forced to collectively flee to save their lives, and find a better future for their children in foreign countries. Greatly affected by the immense suffering of Syrian and other refugees, as well as by our own difficult experiences, we urge the Bosnian-Herzegovinian authorities not to close the borders. That would not only simply go against the spirit and hospitality of our people, but most importantly: it would put the refugees in an even more dire situation than they are currently in, causing them further suffering. At the same time, we urge all governmental and non-governmental agencies, as well as the citizens, to do everything in their power to help the distressed refugees. We especially urge the Islamic Society of Bosnia and Herzegovina to use the potential of its role once again to show the great hospitality and humanity of Bosniak people, and does everything it can to help provide humanitarian aid and shelter to Syrian and other refugees. The number of houses and apartments available for use in the smaller entity is not insignificant, and could be used for temporary housing of the refugees. We believe that Bosniaks are great-hearted people, and that Bosniak Americans will be happy to participate in fundraising funds to provide basic necessities and safe shelter for the refugees.