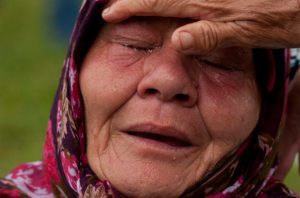 A Bosniak woman Senija Rizvanovic cries near the graves of her two sons, in Srebrenica, Bosnia. Photo by Amel Emric/AP

OTTAWA – The Bosnian government is calling on the Canadian Parliament to correct its “mistake” of not including the 1995 Srebrenica massacre during its Friday recognition of 20th century genocides.

A leading Bosnian Muslim organization says it, too, is surprised that the House of Commons did not include the Srebrenica killings during its Friday debate and vote.

“My impression is that it is an omission and there is still enough time to rectify this kind of omission, or mistake,” Fuad Didic, the charge d’affairs of the Bosnian embassy in Ottawa, said in an interview Monday.

It cited four atrocities: the Holocaust, the 1915 Armenian massacre by Ottoman Turks, the 1932-33 Holodomor famine in Ukraine and the 1994 slaughter of ethnic Tutsis in Rwanda.

But the 1995 Srebrenica massacre of more than 1,000 Muslim men and boys was left out of the private members’ bill tabled by Conservative MP Brad Butt that led to the motion.

They were among an estimated 8,000 Muslim men and boys killed in eastern Bosnia by Serb forces in 1995.

The United Nations has recognized the killings as genocide, the only time it has assigned that designation to a mass slaughter in Europe since the world body’s founding after the Second World War.

“We need to listen to the voice of history and our hopes are that the Canadian parliament will not turn their back to the internationally verified fact,” said Didic.

“Because the genocide in Srebrenica was internationally verified, proven and recognized.”

The Congress of North American Bosniaks and the Institute for Research of Genocide Canada asked in a letter that Srebrenica also be included in the recognition.

Liberal MP Irwin Cotler noted the absence of Srebrenica in Friday’s debate, but supported Butt’s motion, saying he would introduce his own motion in the coming weeks to recognize the Bosnian tragedy.

“They wrote to express their surprise that Srebrenica Remembrance Day and the related motion unanimously adopted by this House on October 19, 2010, are not mentioned in (the motion), and they request that it be included,” Cotler said.

“Indeed, Srebrenica Remembrance Day is the only genocide commemoration day recognized by the House of Commons but not specifically referenced in the motion before us.”

Emir Ramic, of the genocide institute, said he was grateful to Cotler, fellow Liberal Stephane Dion, and New Democrat MPs Brian Masse and Paul Dewar for pushing forward with a motion to recognize the Srebrenica massacre.

Ramic said he was surprised the Bosnian tragedy was left out of Friday’s motion given that the Commons unanimously voted in October 2010 to establish Srebrenica Remembrance Day.

July 11 is the 20th anniversary of the genocide.

The new motion being worked on by the opposition MPs also notes that the Canadian National Museum of Human Rights in Winnipeg has had a permanent exhibition commemorating the Srebrenica genocide since September.

By Mike Blanchfield, The Canadian Press