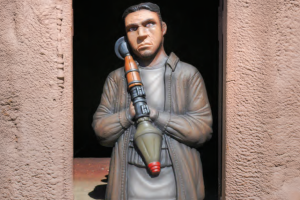 Canadian Bosniak leaders received written responses from the governments of Canada and the United Kingdom in a joint letter to the Congress of North American Bosniaks (CNAB) and the Institute for Research of Genocide Canada (IGC) regarding the information that the Canadian government commissioned targets for the exercise of British soldiers, including the targets called “Bosnian Male”. The letter requested an explanation for the naming of military targets, revocation, and apology for this degrading, discriminatory act. After the terrible torment of aggression and genocide, we came to Canada and accepted it as our second home where human rights, freedom and above all human dignity are protected. Unfortunately, this inappropriate act brings back memories of the horrors of aggression and genocide and threatens our sense of security and equality as Canadian citizens of Bosnian decent. This act of naming the targets as “Bosnian male” is completely unnecessary in Canada, a country that is proud of its cultural mosaic. Furthermore, these actions are hurtful to many outstanding and exemplary Canadian Bosniaks, those who immigrated to this great country as well as the growing generation of Bosniaks who are born as Canadian citizens.

In response, the Ministry of Defense of Great Britain, among other things says: „You will, however, be pleased to know that the British Army use a non-specific geopolitical scenario and no assumptions are made between the catalogue names and the geography of the UK’s operational activity. The catalog name of the target in question will, not therefore, be used as a part of the training undertaken by British troops in Canada“.

In response of Paul Dewar, Member of the Canadian Parliament and NDP Foreign Affairs Critic among other things says: “I share your disappointment in the decision by the Government of Canada to purchase the targets on behalf of the British military with the specifically ethnic description, including that of “Bosnian male”. The association of military targets with a particular ethnic or national community is unnecessary, unhelpful, and incompatible with Canada’s proud traditions as a multicultural society. These inappropriate targets should not be used on Canadian soil, or procured by the Canadian government. Although the notice of procurement has been amendment to remove overt references to the targets’ ethnic or national identity the Government of Canada should apologize for selecting these targets in the first place, and commit to avoid purchasing such targets in future”.

According to information that IGC and Canadian chapter of CNAB received from the Embassy of Bosnia and Herzegovina in Ottawa, through which our letter delivered to the competent national authorities of Canada, the Government of Canada has responded positively to our demands in our letter, expressed regret for clicking a target which is afflicted part Canadian citizens – particularly the Canadian Bosniaks and apologized to the people of Bosnia and Herzegovina in Canada for degrading the appointment of military targets.

Even if the majority of Canadian Bosniaks are victims of the aggression and genocide in Bosnia and Herzegovina they’re still degraded with this inhuman decision on the target names. We welcome decisions of the governments of Canada and United Kingdom for the British army not to use this humiliating and discriminatory target name such as “Bosnian male” for their training. At the same time, we invite Canada the UK as a members of the Governing board of the Peace Implementation Council on even greater activity so that the truth about the worst atrocity in Europe since the Holocaust, the Bosnian genocide, becomes known and for justice to be served for the victims of these horrible crimes. In this regard, we welcome the draft resolution proclaiming July 11 a day of remembrance for the victims of the Srebrenica genocide, which the United Kingdom has prepared and sent to the UN General Assembly for adoption. We urge the government of Canada and all members of UN to support the resolution.

The truth about the genocide in Bosnia and Herzegovina and justice for the victims of this crime are the most important conditions for reconciliation and future life together. Unfortunately, twenty years after the Srebrenica genocide the world has not yet learned the lessons and messages from this crime. Finally, we thank the academic, political and other public subjects who have written support for our action, without who this action would not succeed. Special thanks to the International expert team of the Institute for Research of Genocide Canada on the important role in this action.