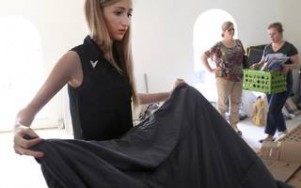 Enver Spahalic, a member of the CNAB board of directors, has been named as one of the main organizers of the Dallas area aid to be provided to the Balkans flood victims. Please read the following article published by the Dallas News:

The fancy dishware that Naida Tabakovic’s grandmother, Ajsa, kept behind lock and key sits buried under two feet of mud. The garden where Ajsa grew her own food — tomatoes, cucumbers, corn and beans — appears more like a giant puddle.

As heavy rains fell over the Balkans last week, Ajsa’s small town of Tinja, Bosnia, was among the heaviest hit. Forced to leave her flooded home, Ajsa finds herself displaced just as she was during the war in Bosnia in the 1990s.

With her grandmother, uncles and cousins facing such destruction, Tabakovic, 20, is among those in North Texas who are organizing a donation drive to aid victims of the floods and landslides, which left at least two dozen people dead across the Balkans.

The drive is taking place at the Bosniak Islamic Center in Wylie. It continues Saturday evening and most of Sunday. Organizers will accept any small, packable items — such as clothes, diapers and canned foods — and ship them to St. Louis, and then to Bosnia, said Enver Spahalic, one of the main organizers.

Though he estimates that it will take a few weeks for the donated goods to reach the devastated area, Spahalic said the Bosnian people will need help for months to come.

“On the first day, we collected enough to fill half of an 18-wheeler,” Spahalic said. “Anyone can get involved. When someone is in need, they don’t really care who is doing the donating.”

During the Bosnian war in the early 1990s, Ajsa fled from home to home as neighboring Serbs and others drove her away because of her Muslim faith, Tabakovic said.

“She worked hard for that house,” Tabakovic said, adding that her grandmother’s flooded house was the first one she had owned by herself. “She finally came to something, and now she lost it again.”

Bosnian officials are worried that the rising waters might have dislodged remaining land mines buried 20 years ago during the country’s war. At least 50 people have died in the floods, and as many as 500,000 have been evacuated from their homes as three months’ worth of rain fell on the region in three days. About 1 million people are without clean water.

Tabakovic’s uncles’ homes sat on higher land and were less damaged from the storms. Ajsa’s, however, was built on the bottom of a hill now caked in deep mud.

Tabakovic said that years ago, her grandmother, her three uncles and nieces and nephews lived in Ajsa’s two-bedroom house. Now, the uncles spend their days scooping buckets full of mud out of the home’s first floor.

Tabakovic, a pharmacy technician, moved to Dallas with her parents and two younger brothers in 2001. Her family had little hope of staying in Bosnia after the end of the war, in which her grandfather and uncle died. In pursuit of a better life and an education, her father chose to move the young family away from where “everything was torn apart and no jobs were guaranteed.”

Now, 13 years later, she and other Bosnians are hoping to send relief back to their homeland. “It’s so sad that only when bad things happen do people come together,” she said. “It’s hard for me to speak about it when there is so much to say.”