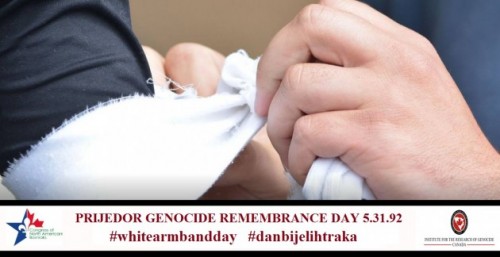 ACTION ALERT: The Congress of North American Bosniaks {CNAB} and the Institute for Research of Genocide, Canada {IGC} invite all friends of truth and justice in North America to show solidarity with victims of genocide committed in Prijedor.

The Congress of North American Bosniaks and the Institute for Research of Genocide, Canada invite all friends of truth and justice in North America and worldwide to show solidarity with victims of genocide committed in Prijedor and around the world on the 31st of May by wearing a white armband or placing a white sheet or flag on your window. This action is intended to raise awareness of the struggle for acknowledgement of millions who suffered injustice and harm. Let’s make this a day to raise our voices against the denial of truth about past atrocities. On May 31, 2014, let’s be the voices of countless victims who were targeted for their race, ethnicity or political beliefs.

On May 31, 1992, the Bosnian Serb authorities in Prijedor, a town in north western Bosnia and Herzegovina, issued a decree for all non-Serbs to mark their houses with white flags or sheets and to wear a white armband if they were to leave their houses. This was the first day of a campaign of extermination that resulted in executions, concentration camps, mass rapes and the ultimate removal of more than 94% of Bosnian Muslims and Bosnian Croats from the territory of the Prijedor municipality. This was the first time since the 1939 Nazi decree for Polish Jews to wear white armbands with the blue Star of David that members of an ethnic or religious group were to be marked for extermination in this way.

Members of the European Commission Monitoring Mission testified that while visiting a mixed Serb/Muslim village as late as August 1992 they saw that the Muslim houses were marked with white flags in order to distinguish them from the Serb houses. The campaign of persecution of non-Serbs that ensued was judged by the International Criminal Tribunal for the Former Yugoslavia to amount to actus reus of genocide.

Thousands of people were killed, detained, tortured, deported or raped and the community that was known as Prijedor was changed forever.

Victims of the genocidal campaign carried out in Prijedor have not received any acknowledgement of their suffering from the municipal authorities to this day. The mayor Marko Pavic and the local government refuse to publicly acknowledge any of the crimes committed in Prijedor, despite numerous judgments of international and local courts. Memorials honoring victims of this campaign have been forbidden and access to sites of their suffering denied by the likes of ArcelorMittal, a company that now owns the site of the former concentration camp in Omarska.

So, please join us in remembering all victims who suffered injustice and harm by wearing a white armband and marking your house with a white sheet on May 31st as a sign of solidarity with the victims and survivors of genocide.