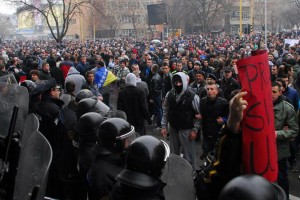 We condemn all forms of violence and hooliganism, particularly attacks on government buildings and institutions because they are contrary to the civic principles mentioned above. We also categorically condemn any attempts of politicization of these issues by ruling parties and opposition parties. All incidents and the attacks on the building of the state of Bosnia and Herzegovina and its institutions should be understood as a tragic consequence of many years of neglect by cantonal, entity and state politicians who have ceased to empathize with ordinary citizens, many of whom live below the poverty line with no prospects for a better tomorrow. It is unacceptable that the Ministry of Security for Bosnia and Herzegovina did not protect government buildings such as the headquarters of Bosnian and Herzegovinian which remains a symbol of resistance to the city of Sarajevo and Bosnia and Herzegovina during the aggression against our country.

Institute for the Research of Genocide Canada (IRGC)