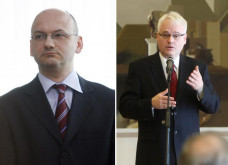 Bosniak NGOs ask Croatian president to take action against his adviser Dejan Jovic, who denies that genocide was committed against Bosniaks the 1992-1995 war in Bosnia and Herzegovina and downplays the responsibility of the Serbian policy of territorial expansion for the war in the former Yugoslavia.

In his book entitled “First Do No Harm: Humanitarian Intervention and the Destruction of Yugoslavia” David Gibbs openly denies that genocide was committed against Bosniaks in the Srebrenica area of eastern Bosnia in 1995, quoting him as saying that the Bosnian authorities shelled their own citizens in besieged Sarajevo.
Portraying Gibbs as “a neo-communist proponent of conspiracy theories who regards Slobodan Milosevic as a champion against NATO expansion and not as a butcher of the Balkans responsible for the deaths of thousands and persecution of millions of people in the former Yugoslavia,” the signatories of the letter said Croatian presidential adviser Jovic wrote a “totally uncritical review” of the book, praising it for challenging the conventional interpretations of the war.
“Dejan Jovic is not quite sure either about who was defending themselves in the Homeland War in Croatia and who the attackers were, as can be seen in his book ‘Yugoslavia – A State That Withered Away’,” the letter said, adding that the fact that such a person “sits in the Office of the Croatian President directly affects the international reputation of Croatia.”
The signatory organisations said that they would notify “all their friends in the world” of this and asked the President of Croatia to state his position on Jovic’s views and to “take appropriate steps.

Read the letter in its entirety: