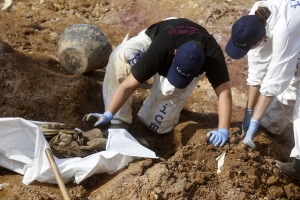 Discovery of the largest, mass grave Tomašica near Prijedor only confirms the extent of the aggression against the Republic of Bosnia and Herzegovina and genocide against its people in Prijedor. Tomašica is not a secondary grave meaning that it was not a place where bodies were afterwards and collectively transported from other graves.

It is a primary mass grave, which was marked as such and brutally implemented and it witnesses the darkest side of the human mind, which was believed to be forever defeated in Europe after the Holocaust.

We recall what the Serbian, Montenegrin and later Croatian aggressors did during this period against the Republic of Bosnia and Herzegovina and the Bosniak people constituted serious violations of international humanitarian law, including aggression and genocide.

This is, among others, witnessed by many mass graves which are being discovered every day, despite the fact that criminals are systematically trying to destroy evidence of these documented crimes.

Thus, the entity of Republic of Srpska was founded on many mass graves as indelible evidence of horrific crimes against human beings,  just because they were of a different ethnicity, nationality, religion, culture, or because they love their home, their city, their country.

Judgments of the International Court of Justice are sufficient to raise the issue and evaluate the legitimacy of existence of such an entity that is built on heinous crimes and persistent denial of those crimes.

On behalf of the survivors and witnesses of aggression against the Republic of Bosnia and Herzegovina and genocide against its people, who are currently living in North America, many of whom were victims of genocide in Prijedor, we support the work of the Institute for Missing Persons in Bosnia and Herzegovina and its forensic experts in the field of mass grave Tomasica.

Their hard and responsible work is of great importance for truth about crimes and justice for the victims of these crimes.

At the time when in the largest mass grave in Tomašica bodies are being  discovered, as further evidence of genocide committed in Prijedor and the surrounding area, the International Criminal Tribunal for the former Yugoslavia is releasing war criminals responsible for these crimes, which further humiliates and insults the victims of aggression and genocide.

As the voice of North American Bosniaks and the voice of the victims of aggression and genocide, we ask that the President of the International Criminal Tribunal for the former Yugoslavia, Mr. Theodor Meron and his deputy, Mr. Carmel Agius and Chief Prosecutor Mr. Serge Brammertz visit Prijedor and the site of mass grave in Tomašica which is new genocide evidence against trial suspects war criminals Radovan Karadzic and Ratko Mladic.

We ask that Bosniak politicians at all levels of government visit the mass grave Tomašica and even with such a symbolic visit to let people know that they care about the rights and freedoms, survivors and witnesses of aggression and genocide.

We express our strongest protest against, incomprehensible, insults to victims and witnesses of genocide in Prijedor, by the current Mayor of Prijedor, Marko Pavic, who said in a public appearance on the question about a mass grave in Tomašica: “These people were buried there and I do not want to go back to the past.”

Mr. Pavic in this statement proves his open hostility towards the victims and witnesses of genocide and aggression, hostile attitude towards non-Serbs in Prijedor and hostile treatment of returnees in Prijedor.

Therefore, he needs to be sanctioned.

Regarding his brutal statement as well as regarding his actions which totally violate human rights and freedoms of non-Serbs in Prijedor we will inform American and Canadian agencies and organizations.

We will seek from the most authoritative political and academic and cultural individuals and organizations in the world to use all means of influencing the Mayor Marko Pavic and his municipal establishment to recognize the right of victims of genocide to justice and truth, to recognize the right to remembrance and memorizing these horrible crimes.

We will ask for the permit regarding construction site of a memorial inside the former camp Omarska.

We will seek that all victims and witnesses are free to educate the general public about the crimes of aggression and genocide.

We will seek the withdrawal of all measures directed against the organizations of victims and witnesses of aggression and genocide, as well as their activists.

Once again we remind you that in Prijedor from 1992-1995 occurred crime and genocide in which were killed 3,227 innocent Bosnians and Croatians, and for 1,000 of them we are still searching.

Citizens of Prijedor, Bosniaks and Croats had to mark their homes with white sheets and wear white arm bands like the Jews under the Nazis.

In the city of Prijedor, Serb ultranationalists are still marching and expressing hatred toward non-Serbs, while the victims of genocide cannot remember or mark the largest atrocities in Europe since the Holocaust.

We, North American Bosniaks call these crimes genocide, and we will do everything that the commanders and perpetrators of genocide in Prijedor get rightly sanctioned.

Signatories of the Press Release

Prof. Emir Ramic, President of the Institute for Research of Genocide Canada (IGC)