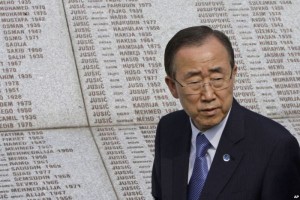 Immediately after your departure from Potocari, Srebrenica, where you paid your respects to the victims of genocide, Milorad Dodik, the President of Bosnia and Herzegovina’s (BiH) smaller entity, Republika Srpska (RS), went on to call RS a state and the country BiH a “community of states.” Statements such as these are clear evidence that the conceptual creators and implementers of aggression and genocide are still present within the political scene in BiH. By taking these positions, Mr. Dodik as well as other genocide deniers within BiH, are attempting to destabilize the government of BiH and are indirectly contributing to the destabilization of Europe and the world. Public statements that call into question territorial integrity, sovereignty and the future of BiH are dangerous, inaccurate, counterproductive and contrary to international legal standards. Mr. Dodik’s harmful rhetoric undermines the hard-won peace and stability of the entire region and go hand in hand with Slobodan Milosevic’s goal of creating a “Greater Serbia” – by division of BiH and through the destruction of the Bosnian people.

For decades, Mr. Dodik and his political party have been undermining the very foundations of the constitutional order within BiH and are continuing to raise tensions that could easily escalate into conflict. For example, when Kosovo declared its independence, Mr. Dodik stated that “We, in the Republika Srpska can learn and take Kosovo’s declaration of independence as an example.” Through his statements and actions over the years, Mr. Dodik has proven to be a destabilizing force within the region and the United Nations can no longer be silent. The passive approach of the UN at acting swiftly to put an end to these devisive and harmful policies must be reversed and action must be taken.

Under the Charter of the United Nations and the Convention on the Prevention of Genocide and on behalf of the survivors and witnesses of genocide in BiH, we urge the United Nations to sanction Mr. Milorad Dodik for endangering the already fragile peace within BiH. The UN must send a strong message which shows that genocide will no longer be appeased and tolerated.

The United Nations must be clear in pointing out that the RS is not a state, but an entity that is part of a sovereign BiH. The BiH Constitution leaves no room for any kind of a “sovereign” entity or authority that is based on the expression of nationhood, and the Dayton peace agreement does not contain any provision according to which the RS can become a state in the future.

Furthermore, we also urge the United Nations to immediately take measures for the extradition of documents held by the Supreme Defense Council on the participation of Serbia and Montenegro in the aggression against the Republic of Bosnia and Herzegovina and the genocide that was committed against its citizens. It is unacceptable that in 2003, Ms. Carla Del Ponte, former chief prosecutor of the International Criminal Tribunal for the Former Yugoslavia was able to make an agreement with the government of Serbia in only using these documents in the case against Slobodan Milosevic.

Additionally, we request an investigation into the 2005 and 2006 destruction of more than a thousand personal items that were found in the Srebrenica mass graves and ordered by the former Prosecutor Carla del Ponte during her time at the International Criminal Tribunal for former Yugoslavia.

Lastly, we request an investigation to be conducted regarding the personal responsibility of the leading commanders of the United Nations regarding the fall of Srebrenica.

The facts clearly show that the intentions and actions of the Serbian leadership will have to be punished by law, and that the deep and lasting injury committed against non-Serbs throughout BiH must be called by its real name – genocide. Only by recognizing the aggression against the Republic of Bosnia and Herzegovina and the crime of genocide against its citizens will the United Nations be able to hold the legitimacy of being the upholder of the universal values of peace, justice and freedom. The United Nations have an obligation to promote and protect fundamental human rights and the respect for human dignity so that society and its leaders cannot evade accountability for their actions.

This letter was also sent to: Mr. Valentin Inzko High Representative of Bosnia and Herzegovina.