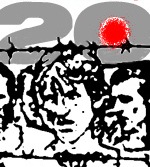 Genocide and other forms of crimes against humanity and international law in the area of ​​Prijedor municipality lasted continuously during the war in Bosnia and Herzegovina from 1992-1995. The results was 3,173 civilians killed including 102 children, 256 women, and more than 31,000 people  imprisoned in concentration death camps. More than 53,000 people were victims of ethnic cleansing, persecution and deportation. In just three months 94% of Bosniak people were killed or expelled from the Prijedor municipality.

The genocide in Prijedor was investigated by the International Criminal Tribunal for Former Yugoslavia (ICTY) in The Hague, resulting in indictments of  Slobodan Milosevic,  Radovan Karadzic and  Ratko Mladic.  Additional indictments resulted in 28 convictions for genocide in Prijedor, most of the individuals convicted by the ICTY with the involvement of Court of Bosnia and Herzegovina and the District Court in Banja Luka.

Twenty years later, the genocide in Prijedor continues through other means. Survivors are not permitted to mark the truth about these crimes, to pursue justice, and remember the crimes that alarmed the entire world, proving once again that the lessons of the Holocaust have not been taken seriously. Without the truth about genocide in Prijedor and without justice for the victims of these crimes, there can be no true coexistence or reconciliation which are both necessary to restore the good old true city of Prijedor.  As it stands, Prijedor is only a shadow of its former self. It can no longer be called a city because it has been forcefully deprived of its Bosniak spirit or the spirit of Bosnia and Herzegovina and its ideals.

Mayor of Prijedor,  Marko Pavic, denies genocide, denies torturing and killing in concentration death camps, and is blocking the construction of memorial to the victims of genocide. Unfortunately, because there is no law prohibiting genocide denial in Bosnia today, The only way to get rid of this genocide denier is to elect another mayor of Prijedor through local elections.

To this end, the Institute for Research of Genocide Canada, the Congress of North American Bosniaks,  and the Advisory Council for Bosnia and Herzegovina invite all U.S. and Canadian Bosniaks from Prijedor to register to vote in the municipal elections which will be held on October 7, 2012.  To register to vote, , so please fill out the form which you can find HERE.

The last date for registration is July 24, 2012.  To register, you must have a valid  identification card, driver’s license or passport, issued in Bosnia and Herzegovina. Once you complete the form, please send a signed copy of the form, together with a copy of your identification documents to an e-mail: ppprijava@izbori.ba or to submit the necessary documents via fax to +387-33-251-333 OR +387-33-251-334.

Those Bosnian citizens who are not from Prijedor, but would like to take participation in local elections for Prijedor, you can do it if you change your official place of residence in Bosnia and Herzegovina. In this case the person should go to Prijedor and obtain a new ID card that will allow them to vote in municipal elections on October 7, 2012.

United States and Canada are home to more than 350,000 Bosnian citizens of whom thousandsused to live in Prijedor prior to the war and genocide in BiH.  We ask all Bosnian citizens to show solidarity with the citizens of Prijedor and help to resolve this situation in a fair manner.