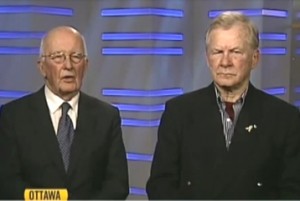 Twenty years on, denial of genocide, crimes against humanity and war crimes against the Bosniak population continues to be perpetrated and this time it comes from the former Yugoslavian Ambassador James Bissett and retired Major General Lewis MacKenzie. On April 11th, they sat down with CTV news to discuss the 20th anniversary of the Siege of Sarajevo. [1] To no avail, the discussion about the longest siege in modern history did not happen. Instead the conversation was focused on denying and justifying the atrocities committed by the Serbian Army by attempting to place the blame on the United States for not preventing the conflict and attempting to equalize the blame between the Army of Bosnia and Herzegovina and the illegal Bosnian Serb Army. Unfortunately these are the typical sentiments that can be expected from Mr. Bissett and Mr. MacKenzie since both men have close ties with right wing extremists and genocide deniers such as SrdjaTrifkovic, Stephen Karganovic and Julia Gorin. [2] Furthermore, Bissett is the founder of the “Lord Byron Foundation for Balkans Studies” with the right-wing views. The articles published on the website not only deny the genocide committed against Bosniaks in Bosnia and Herzegovina and Rwanda, but also launch personal attacks against individuals who fight for justice and truth for the victims of genocide. Mr. Bissett was a good friend of Slobodan Milosevic, the former Yugoslav president who died at The Hague, where he was being tried on war crimes charges. It’s ironic, and even diabolical, for former general MacKenzie to say that anyone who committed war crimes should not be able to sleep at night. Mr.MacKenzie has been accused of raping Bosniak women during the war – women who were offered to MacKenzie as “gift” by Serbian soldiers. [3] Bosnian authorities have requested from the Canadian government that MacKenzie be made available for questioning regarding these accusations. This has yet to happen. Retired Canadian Army General Lewis MacKenzie is hiding behind his “diplomatic immunity.“

Survivors of the Genocide that took place in Bosnia and Herzegovina, those living in Bosnia and Herzegovina, as well as in United States of America and Canada scattered throughout the world, have yet to come to terms with the horrors that took place in this blood-soaked country from 1992-1995. Bosniaks survived unimaginable horrors: ethnic cleansing (a euphemism for genocide), concentration camps, and rape camps. Many of those who were forced out of their homes have never returned to their hometowns. Healing and reconciliation is what is needed for the people of Bosnia and Herzegovina. In order for that to happen, dialogue must take place. But genocide deniers cannot be included in this dialogue. These people are an insult to all of the war’s victims, regardless of ethnic background.

Men like Bissett and MacKenzie are a disgrace to Canada, and do not reflect the strong moral values that Canadians hold dear. These are not people who should be offering advice on peacekeeping and foreign policy. Canadian TV ought to do a thorough research on people they choose to feature in their news segments. Viewers deserve better than to be fed distorted lies and half-truths by unscrupulous men, and to have these presented as “news” to the Canadian public.

Mr. Bissett and Mr. Mackenzie attempt to deny that the war was started by Bosnian Serbs with strong support from the Serbian Army. The Institute for Research of Genocide Canada would like to remind Mr. Bissett and Mr. MacKenzie that as Croatia and Slovenia, Bosnia and Herzegovina had a right to decide on accession from Yugoslavia through a democratic referendum which took place in 1992 and Serbs voluntarily boycotted. Furthermore, Radovan Karadzic’s speech in front of the Bosnian Parliament in 1991 openly threatened the existence of Bosniak people if accession were to occur. [4] His speech indicates that the only way to prevent a conflict was if the Bosniaks and Croats agreed to stay in a Serb-dominated Yugoslavia. In the CTV interview, Bissett openly states that the conflict would not have happened if Bosniaks followed the Radovan Karadzic’s rules. Bissett also attempts to place equal blame on the Bosniaks and the Serbs for the atrocities committed during the conflict. However the facts do not lie. The evidence against the Bosnian Serb political and military leadership and the army is overwhelming: presence of concentration camps, rape camps, forced impregnations, ongoing discovery of mass graves, over 200,000 people killed of which 22 000 children, over 240,000 injured, of which 52,000 children, over 100,600 handicapped, of which 4000 children, over 1.225 million displaced in over a hundred countries, over 850,000 displaced persons within Bosnia and Herzegovina, over 53, 600 missing persons of which 28,420 from Srebrenica and Zepa, over 475 villages were completely destroyed, 61 cities occupied or still under Serb occupation, victims’ struggle with the past and the evidence presented in courts are all examples that prove the guilt of the Bosnian Serb Army for the atrocities committed between 1992 and 1995. [5] We suggest Mr. Bissett visits Bosnia and Herzegovina and speaks to the victims to get a sense of the severity of damage committed by the Serbs.

Bissett and MacKenzie present the Bosnian war as a “civil war of factions”, with all three ethnic groups, committing atrocities. They attempt to blame Bosniaks and the President of Bosnia-Herzegovina at the time, Alija Izetbegovic, for starting the war.

The Bosnian War was an international armed conflict and a war of aggression against the citizens of Bosnia and Herzegovina, who, in a referendum that took place on February 29th, 1992, voted for independence from Yugoslavia. Both Serbia and Croatia supported and armed fellow Serbs and Croats in Bosnia, in an effort to create “ethnically pure” swaths of territory. The following represents a summary of important truths:
1) The CIA estimated that at least 90% of all war crimes were committed by the Serb side; and
2) The overwhelming majority of victims were Bosniaks, who faced the possibility of extinction as a group from the beginning of the war right up until the end. According to Dr. Smail Cekic, Professor at the Faculty of political science and Director of the Institute for Research of Crimes Against Humanity and International Law, University of Sarajevo; numerous relevant sources of different provenance reliably suggest the two initial and basic, essential fundamental settings and provisions for the contemporary events and episodes in the Republic of Bosnia and Herzegovina at the end of 20th century: First, a classic armed aggression was conducted against the Republic of Bosnia and Herzegovina, that is, it was crime against peace and safety of mankind which is according to the basic understanding and definition an international armed conflict and Second, the worst crimes – crime of genocide was committed in the territory of the Republic of Bosnia and Herzegovina against Bosniaks under siege. [5]
Mr. Bissett and Mr. MacKenzie are staunch supporters of the most radical ultra-nationalist Serbian groups. Both have also taken on the role of paid mouthpieces for Serbian-American and Serbian-Canadian lobby groups. They have gone as far as to deny that genocide took place in Srebrenica in July, 1995, when the Serb army, run by General RatkoMladic (awaiting trial at The Hague for war crimes), overran the UN safe haven, killing 8372 men and boys and forcibly transporting 25,000 women to Bosnian-held territory. Their tactics include downplaying, denying or minimizing the losses suffered by Bosniaks, Croats, and other non-Serbs (even when these are supported by findings of the international community), while grossly exaggerating Serbian losses and casualties of the war.

We, the undersigned representatives of our respective organizations, express our dismay and disappointment that twenty years on, the attempt to place equal responsibility from external actors on both parties continues instead of attempting to create a framework for reconciliation. Mr. Bissett and Mr. MacKenzie have been close allies with Serbs since the beginning of the conflict and the fact that they continue to promote genocide denial and present false facts such as the ones seen on the CTV news segment contributes to the hostilities between the Bosniak and the Serb community. In addition, Mr. Bissett disregards and disrespects the rights of the survivors of the genocide and grave breaches of the Geneva Convention. Until individuals such as these two continue to add fuel to the fire, no progress can be made toward reconciliation between Bosnian and Serbian communities.

We strongly encourage Canada and the international community to re-commit its efforts in the campaign against genocide and to reengage in Bosnia and Herzegovina so that similar atrocities never occur again.

4]See: Professor dr. Smail Čekić, Research of Genocide Victims with a special emphasis on Bosnia and Herzegovina, The Institute for Research of Crimes Against Humanity and International Law of the Sarajevo University

5]See: Professor dr. Smail Čekić, The Aggression Against The Republic Of Bosnia And Herzegovina: Planning, Preparation, Execution, Part I, II