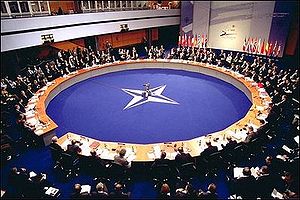 As an organization that advocates for peace and stability in the Balkans, we have repeatedly called for U.S. support of Bosnia and Herzegovina’s membership action plan (MAP) for NATO and to expedite its candidacy which is in the mutual national interests of both countries.

For Bosnia and Herzegovina, full NATO membership would bring about an increased sense of stability and security, ensuring that the horrors of the nineties shall never be repeated and that Bosnia and Herzegovina can never be threatened by any of its neighbors. . It would also have very positive political and economic effects, as NATO membership would mean that Serb ultra-nationalists’ separatist agenda would be put to rest, while increased confidence in future stability would lead to more direct foreign investments and a much needed boost to the economy.

Likewise, the United States has a strategic interest in the region to ensure stability, and to retain diplomatic and economic influence in a region that has traditionally been under threat of Russian domination through  Serbia’s nationalists.  Bosnia and Herzegovina is a proven friend of the United States, and the Bosnian people will never forget the assistance that was provided by the U.S. led NATO military intervention to bring about the end to the war of aggression on Bosnia and Herzegovina.  Despite political challenges, this is evidenced with the fact that Bosnia-Herzegovina was one of the first countries to sign the Status of Forces Agreement (SOFA) with the United States; it cooperated with the United States on matters of security, counter-terrorism, as well as prevention of drug and human trafficking. Bosnia and Herzegovina has also been a key partner with the NATO forces, in the United Nations Security Council, actively participating in missions in Afghanistan and Iraq, and Bosnian forensic experts helped US officials identify 9/11 victims, just to name few examples.

On behalf of more than 300,000 Bosniak Americans, CNAB encourages all of its members and friends of the Bosnian people to call their United States Senator and ask them to support NATO Enhancement Act, S.2177.  To locate your senator, please visit the U.S. Senate website.