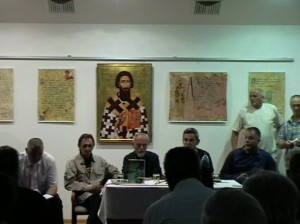 A convicted war criminal who burned alive scores of Bosniak civilians and systematically tortured and raped Bosniak women and under-age girls enjoys the uncritical endorsement of the Serbian Orthodox Church.

The Humanitarian Law Center in Belgrade reports that the Serbian Orthodox Church has hosted a book launch at the parish house of the Cathedral of St. Sava in Belgrade to promote a prison memoir, “Ispovest haškog sužnja” (“Testimony of a Hague prisoner”). The book’s author is the convicted war criminal Milan Lukić — a ruthless mass murderer and serial rapist. The Belgrade publisher responsible for promoting the launch is the Serbian Radical Party led by ultra–nationalist politician Vojislav Šešelj. Šešelj himself is currently on trial at the International Criminal Tribunal for the former Yugoslavia (ICTY) in The Hague for crimes against humanity. The manuscript of Lukić’s book was smuggled out of the UN Detention Unit illegally.

In 2009 the International Criminal Tribunal at the Hague found Milan Lukić guilty of burning alive more than 120 Bosniak women, children and elderly men in the eastern Bosnian town of Višegrad. He was sentenced to life imprisonment for his terrible crimes.

On 14 June 1992, a group of victims, most of them from the same village, were locked into one room of a house on Pionirska Street, Višegrad, which was then set on fire. Milan Lukić was found to have placed an explosive device in the room which set the house ablaze. He then shot at people as they tried to escape the burning house. At least 59 women, young children and elderly people were burned alive, among them a 2-day-old baby.

Lukić was also found guilty of burning alive at least 60 women, children and elderly men two weeks later, on 27 June 1992, in a house in the Višegrad settlement of Bikavac. He and other members of his paramilitary group, ‘White Eagles’, forced the civilians inside the house, blocked all the exits and threw in several explosive devices and petrol, setting the house on fire.

“The perpetration by Milan Lukić and [his cousin] Sredoje Lukić of crimes in this case is characterised by a callous and vicious disregard for human life,” presiding Judge Patrick Robinson noted.

He observed that, “In the all too long, sad and wretched history of man’s inhumanity to man, the Pionirska street and Bikavac fires must rank high. At the close of the twentieth century, a century marked by war and bloodshed on a colossal scale, these horrific events stand out for the viciousness of the incendiary attack, for the obvious premeditation and calculation that defined it, for the sheer callousness and brutality of herding, trapping and locking the victims in the two houses, thereby rendering them helpless in the ensuing inferno, and for the degree of pain and suffering inflicted on the victims as they were burnt alive.”

Milan Lukić also participated in systematic sexual assaults on Bosniak women and under-age girls in “rape camps” in and around Višegrad. Most notably the Vilina Vlas spa hotel on the outskirts of Višegrad was used as a rape camp while it was, on Lukić ‘s own admission, his military unit’s command post. Approximately 200 women and under-age girls were detained  in Vilina Vlas. The Association of Women Victims of War — led by rape survivor Bakira Hasečić — believes that fewer than ten women prisoners survived their detention.

Rape and sexual slavery charges were added to the indictment against Lukić less than a month before the trial. The day before proceedings were due to begin, the Trial Chamber ruled that the accused did not have enough time to mount an adequate defence.

I have taken the liberty of translating this short but important press release issued by the Humanitarian Law Center from Serbian into English:

“Humanitarian Law Center urges the institutions and citizens of the Republic of Serbia to condemn publicly the use of the Parish House of the Cathedral of Saint Sava in Belgrade for the launch of a book by the convicted war criminal Milan Lukić during which priests of the Serbian Orthodox Church took part in the eulogisation of a war criminal responsible for some of the most terrible crimes against humanity.

Humanitarian Law Center demands that the Patriarch reveal the names of the priests who took part in this public event and explain to the public why a religious building whose construction was paid for by the state and many individual citizens has been used to celebrate a convicted war criminal who burned women and children alive.

On 29 July 2011, in the parish house of the Cathedral of Saint Sava in Belgrade, an event to promote the book ‘Confession of a Hague Prisoner’ by the war criminal Milan Lukić was attended by several priests of the Serbian Orthodox Church in the company of numerous Lukić supporters. The book is published by the Serbian Radical Party.

The Trial Chamber of the International Criminal Tribunal at the Hague sentenced Milan Lukić to life imprisonment for shooting five Bosniaks beside the Drina River on 7th June 1992, killing seven workers of Varda factory, burning alive at least 120 Bosniak women, children and the elderly in Višegrad’s Pionirska Street and Bikavac district, the ‘cold and brazen’ murder of Hajra Koric and the brutal torture of Bosniak detainees in Uzamnica detention camp near Višegrad. In all these crimes, Milan Lukić, played a ‘dominant role’ and exhibited a ‘callous and vicious disregard for human life’, personally killing ‘at least 132 people’ according to the judges at the International Criminal Court.”

An album of photos from this ‘book’ promotion can be found on Milan Lukić’s Facebook page, which is being maintained by the priests of the Serbian Orthodox Church.

This post was originally published on the Official Blog of Daniel Toljaga found here: http://danieltoljaga.wordpress.com/2011/08/08/serbian-orthodox-church-endorses-war-criminals/