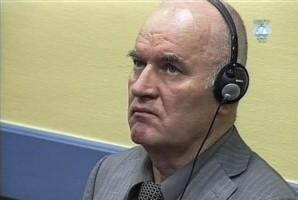 Associated Press and Reuters — two major global news agencies — are both feeding the public misleading information about the charges against Ratko Mladic.

Throughout their news reporting, they unceasingly repeat the inaccurate information that Mladic is charged only with genocide at Srebrenica and the siege of Sarajevo.

The fact of the matter is that former commander of the Bosnian Serb army currently before the International Criminal Tribunal is charged with orchestrating genocide not only at Srebrenica, but also in a number of other Bosnian municipalities: Bratunac, Foča, Ključ, Kotor Varoš, Prijedor, Sanski Most, Vlasenica and Zvornik.

Although I have lodged complaints with Associated Press and Reuters regarding this issue, they haven’t even acknowledged my complaint, which begs the question: are they doing this on purpose or unwittingly?

Here is a list of charges against Ratko Mladic and a full video of his first court appearance:

Count 4: Extermination, a Crime Against Humanity.

Count 5: Murder, a Crime Against Humanity.

Count 6: Murder, a Violation of the Laws or Customs of War.

Count 7: Deportation, a Crime Against Humanity.

Count 9: Acts of Violence the Primary Purpose of which is to Spread Terror among the Civilian Population, a Violation of the Laws or Customs of War.

Count 10: Unlawful Attacks on Civilians, a Violation of the Laws or Customs of War.

Count 11: Taking of Hostages, a Violation of the Laws or Customs of War.