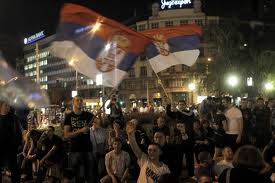 Hamdija Custovic, spokesperson for the CNAB Board of Directors spoke to CNN reporter Moni Basu  regarding the arrest of Serb war criminal Ratko Mladic.  Along with his personal story of witnessing the aggression on Bosnia and Herzegovina and brutal detainment of Bosniak civilians in his hometown of Gacko , he expressed views held by CNAB regarding the peace and reconciliation process in the Balkans.  Here is the excerpt of the article:

Mladic’s arrest cannot erase the mistrust embedded deeply in Bosnian hearts, said Hamdija Custovic, who was only 12 when he witnessed war’s horrors. The men in his hometown of Gacko were rounded up to be taken to concentration camps. His father escaped to the mountains, where he hid for four months.

Reconciliation was one of the themes sounded by Serbian President Boris Tadic as he announced Mladic’s arrest. But Custovic, the spokesman for the Congress of North American Bosniaks, was skeptical.

“I think it is one of the steps,” he said. “But we have to keep in mind that this cannot end here. Just because they arrested (former Bosnian Serb leader Radovan) Karadzic and Mladic, it does not absolve Serbs of responsibility for the campaign that was led by thousands of soldiers.”

The Germans, said Custovic, accepted responsibility for the Holocaust. There are many Serbs, he said, who will still deny that ethnic cleansing took place in Bosnia.

Full text of the CNN article can be found here: http://www.cnn.com/2011/WORLD/europe/05/26/serbia.mladic.victims/index.html

Peace and reconciliation cannot be accomplished without the acceptance of responsibility, not only by the Serbian government and the politicians in Republika Srpska, but also by the Serb people themselves.  Far too many Serbs still actively or passively deny the Bosnian genocide and want the war blame spread to the victims themselves.  It is important for new generations of Serbs to reconcile the troubled history of the Serbian people and reject the dogma of hatred and prejudice towards their neighbors. The mass protests occurring in Serbia tonight indicate that Serbian nationalism, left unchecked, is still the main threat to peace and stability in Bosnia and Herzegovina and the entire region. The United States, European Union, and the international community must ensure that the policies of aggression and genocide are never allowed to repeat.