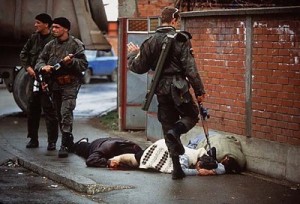 I have been following with great dismay the intensification of attacks on the Institute for Research of Genocide of Canada {IRGC}  and the Congress of North American Bosniaks {CNAB} through various channels including the internet and telephone threats towards members of these two organizations.

Along with diplomatic pressure aimed at redrawing the borders of internationally recognized Republic of Bosnia and Herzegovina, a multiethnic democratic state of equal constituent ethnic groups and other minorities, a synchronized and organized attack campaign is being carried out by a fascist and neo-Nazi lobby that operate in the territory of Canada and the United States.

The aim of these retrograde post-war forces is to jeopardize the existence of both IRGC and CNAB, through various media smear campaigns and even directly threatening their leadership and members. The attacks were particularly intensified after the government of Canada’s decision to forbid entry to genocide denier Srdja Trifkovic who was scheduled to give a lecture to students of Serbian nationality in Vancouver at the University of British Columbia. It is regrettable that these young people consciously or unconsciously follow a policy that initially indoctrinated their grandparents, parents, and now their own generation, guiding them to a dismissive attitude toward the genocide committed against Bosnia and Herzegovina, Bosnian Muslims, and all other ethnic groups who consider Bosnia and Herzegovina an irreplaceable and indivisible motherland, with its unique history, cultural tradition, languages, and its sovereign place on the geopolitical map of Europe and the world.

Only the enemies of humanity and civilization can deny that Bosnia was on many different occasions exposed to genocidal conquest and devastation.  On all these occasions the enemies attacked the territorial integrity of Bosnia and Herzegovina and its sovereign people. Bosnian rich history is full of examples of how its brave people, regardless of religious orientation, bravely resisted all invaders, and that the never did any attempt of assimilation have permanent success.

General symbol and character of all these conquests is genocide.

According to the definition of genocide registered in 1948 at the Convention on the Prevention and Punishment of the Crime of Genocide, this uncivilized act means any deliberate, systematic violent action aimed at destruction, in whole or in part, of an ethnic, religious, or national group, with the intention to kill, persecute, dislocate, or steal their movable and immovable property.  This definition includes the terror and deprivation of liberty, torture of prisoners, torture and abuse of the weak and defenseless people.

The war against Bosnia and Herzegovina in the period 1992 – 1995, and particularly against the Bosnian Muslims, officially known as Bosniaks, was conducted as a classic genocidal war. The city of Sarajevo was subjected to genocidal blockade, siege, constant artillery and sniper fire from the breakaway parts of the Yugoslav National Army (JNA) joined by Chetnik (Serb ultranationalist) paramilitary formations that did not care that the city was also inhabited by a significant number of Serb people. All citizens of Sarajevo were abandoned hostages, victims of a pathological obsession to kill utilizing all irrational forms of destruction. It was the same case with all other cities such as Visegrad, Foca, Kljuc, Bihac, Bijeljina, Banja Luka, Prijedor, and Srebrenica. Croatia joined in the destruction of Bosnia as a hostile party interested in the forced division of the state along ethnic lines, as it aspired for centuries before to detach a part of BiH territory. Independent State of Croatia (NDH), a puppet Nazi state, proved its genocidal brutality during the Second World War.  After the cease-fire during the epoch of socialism, irredentist ambitions of “Herceg-Bosna” and “Republika Srpska” escalated to the level of the mass pogroms. No reasonable person can deny that their war machine functioned as a genocidal system

It is therefore of paramount importance, for the purpose of defense of truth, morality, justice, positive law and the overall achievements of civilization, that IRGC and CNAB are protected, and the United States and Canada prosecutes to the fullest extent of the law, all perpetrators who violently threaten and intimidate the members of both organizations. Furthermore, this critical moment is an opportunity to coordinate efforts with other countries to start forming similar institutes who will sanction all forms of genocidal actions and to initiate the arrest of the perpetrators, regardless of where they are or who they are.  There are more than 20,000 such individuals who are free to roam and incite genocide.

I welcome the decision of the Government of Canada to allow the establishment and operation of IRGC, as well as the decision to indiscriminately refuse entrance and residence to all those who generate, propagate and spread national, religious and racial intolerance and hatred.

As people devoted to studying the phenomenon of humanity and the sources and causes of inhumanity, I invite all humane people to join the defense of the truth about Bosnia. In the name of all the victims of war in the world, it is the duty of every individual to choose only the voice of their conscience. In particular, I call deluded members of religious communities, political and national associations, to resist manipulation, warmongering aspirations and to abandon allegiances to the sick self-proclaimed national leaders. These are not true leaders, but charismatic destructionists who, during their personal megalomaniac regressions, are guiding the entire society to the brink of collapse. It is necessary to identify them everywhere as opponents of humanity and the enemies of their people, and all others nations. The courts of history will sooner or later reveal them as the pillars of shame and join them to those who have already been identified as members of the legion of terror and violent death of innocent people. Genocide must be actively confronted.