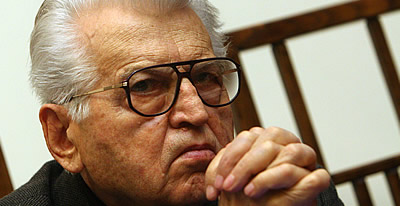 To the Nobel Prize Committee for Literature

The Congress of North American Bosniaks (CNAB), Institute for Research of Genocide Canada (IRGC), and Bosnian-American Institute for Genocide and Education (BAGI), on behalf of victims of crimes of aggression and genocide in Bosnia and Herzegovina, voice their concern over possible proposal to the Committee of the Nobel Prize that Dobrica Cosic be awarded a prestigious award for literature. Such a proposal would not only be an insult to the Nobel Prize institution, but also a moral blow and insult to mankind and civilization in general.

Dobrica Cosic is the well known creator of the Serbian policy of aggression against Bosnia and Herzegovina and Croatia and genocide against Bosniaks in Bosnia and Herzegovina and in Sandzak. He is the creator of an agreement between the Serbia and Croatia (agreement Milosevic – Tudjman) on “humane” displacement of Croats and persecution of Bosniaks from the Bosnian Posavina region, so that it could be inhabited by Serbs, which would ensure that the corridor between Belgrade and Banja Luka is inhabited exclusively by Serbs. By creating the ideology of “Greater Serbia” and practical application of such an ideology within the Serbian Academy of Arts and Sciences, Cosic’s crimes of aggression and genocide were adopted and recognized as a legitimate means of achieving nationalist policies, whose ultimate goal was for all Serbs to reside in one state. UN Declaration on Genocide expressly qualifies as a genocidal crime any displacement or coercion of any national, religious or cultural communities to abandon their traditional place of living forcefully moved to another location.

The creator of the biggest crimes against humanity at the end of the twentieth century, created in a criminal Serbian Academy of Arts and Sciences recently stated that the President of the Republika Srpska, a smaller of the two entities in Bosnia and Herzegovina, Milorad Dodik, is a pragmatic politician with lifestyle awareness about the dangers that await creation genocidal warrior and a willingness to defend the acquired state. To the victims of crimes of aggression and genocide in Bosnia and Herzegovina, these statements are reminiscent of the war drums of the 1990s after which the Bosnian land was devastated with more than a hundred thousand killed, tens of thousands of people tortured in concentration camps, tens of thousands of women raped, more than one million people expelled, and tens of thousands of Bosniak historical monuments and symbols destroyed.

This disqualifies Dobrica Cosic for the Nobel Prize, which has traditionally been a significant recognition of high significance based on highest moral standards. If Cosic were to be awarded the Nobel Prize, it would mean rewarding the strategic and ideological creators of aggression and genocide. Nobel Prize institutions would then be permanently tarnished, and lose all moral significance. This would give the impetus to create a new crime of aggression and genocide.

Dobrica Cosic’s entire political action was centered on creating an environment in which ultra-nationalism and policies of aggression can be executed to achieve their objectives at the painful expense of all others in the region. On behalf of hundreds of thousands of victims of crimes of aggression and genocide in Bosnia and Herzegovina, we ask the Committee for the Nobel Prize not to take into consideration the nomination for the Nobel Prize for Literature for Dobrica Cosic.