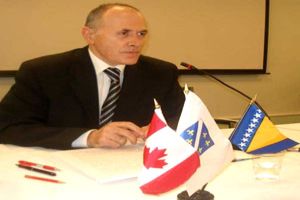 Around the end of the 20th century and the beginning of the 21st century, numerous and versatile historic forgeries are present based on political and ideological grounds, which present untruthful facts about the events in Bosnia and Herzegovina that they interpret without any foundation in the documents or the archives, and then they construe political truths applicable in current circumstances. Unfortunately, we are faced with the merciless abuse of science by scientists without any scruples or accountability, as well quasi-scientists. This is particularly characteristic for the Great Serbian intellectuals and politicians who build and establish foundations for the ideology, policy and the practice of crimes.

Considering the lies, deceptions, and forgeries of the Great Serbian intellectual (secular and spiritual) elite, it is necessary, for the sake of human, scientific, and historic truths and, dozens, thousands, hundreds of thousands and millions of victims of the Balkans during the last two centuries, to point out at important facts:

– first, Great Serbian state project, which is unfortunately the reality. The project is of Nazi and criminal character, because it, inter alia, contains two big mutually connected elements: conquering of somebody else’s territories (lebensraum), including Bosnia and Herzegovina, and the extermination of peoples, that is, genocide, crime of all the crimes, including the genocide directed against Bosniacs in Bosnia and Herzegovina (to “finally resolve the Muslim issue”). Although it was militarily defeated in the WWII, when the political program of the Chetnic movement of Draža Mihailović and the Exile government in London, persistently supported by Allies, the Serbian great state project in the second half of the 80-ies of the last century was restored and it escalated in conquering wars and ample crimes against humanity and international law, including the genocide against Bosniacs in the Republic of Bosnia and Herzegovina, and

– second, the complexity of fighting for Bosnia, restoration of its statehood, and defense of its territorial integrity, sovereignty, and independence, especially during the WWII and around the end of 20th century.

Please read the rest of the paper below:
Dr. Cekic -25th November – Day of Bosnia and Herzegovina statehood