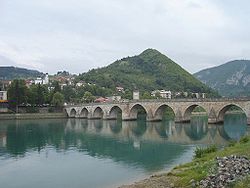 Judge Patrick Robinson, President of the International Criminal Tribunal for the former Yugoslavia, passing sentence on two of the prime culprits, observed that:

“In the all too long, sad and wretched history of man’s inhumanity to man, the Pionirska Street and Bikavac fires must rank high. At the close of the twentieth century, a century marked by war and bloodshed on a colossal scale, these horrific events stand out for the viciousness of the incendiary attack, for the obvious premeditation and calculation that defined it, for the sheer callousness and brutality of herding, trapping and locking the victims in the two houses, thereby rendering them helpless in the ensuing inferno, and for the degree of pain and suffering inflicted on the victims as they were burnt alive.”

The two massacres, in which nearly 150 Bosniak civilians – women, children and elderly – were burned alive by Bosnian Serb Army soldiers, took place in June 1992 in the eastern Bosnian town of Visegrad.

The few survivors and relatives of the victims are anxious to have memorial monuments erected at the two localities to honour the memory of those who perished and to serve as a reminder to future generations.

Image: The house of Adem Omeragic in Pionirska Street where around 70 Bosniak civilians were burned alive by Bosnian Serb soldiers. (Photo credits: ICTY)

The Pionirska Street and Bikavac Massacres Memorial Committee therefore wish to invite proposals from which architectural designs for two monuments will be chosen.

The monuments will be respectful, simple, robust and appropriate to their site.  The Committee has no revenues of its own and in the absence of external funds the monuments project is being proposed as a public interest scheme.

Interested applicants should bear this in mind and submit their designs on a pro bono publico basis, in the anticipation that no fee or expenses will be paid. It is hoped that the memorial monuments will be in place ahead of the twentieth anniversary commemoration events in 2012.

For general background information and details of the Committee’s specific requirements, architects interested in contributing to the remembrance of these two terrible crimes should initially contact