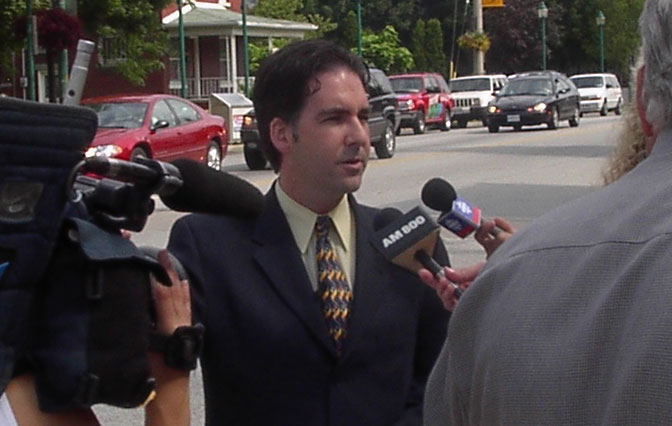 OTTAWA, ON – Today Brian Masse M.P., NDP Industry, Automotive, and Border Critic declared a victory for human rights as the motion he introduced to establish a Srebrenica Remembrance Day in Canada was passed in the House of Commons by unanimous consent after a long campaign which began more than a year ago in his riding and was lead by the Bosnian-Canadian community.

“The time is long past due for Canada to declare July 11 Srebrenica Remembrance Day. This anniversary raises awareness of the tragic suffering of the people of Bosnia and honours and remembers those who were killed as a result of the policies of genocide, ethnic cleansing, and war crimes carried out in Bosnia and Herzegovina from 1992 to 1995,” Masse stated. “With this declaration, Canada acknowledges the importance of this event in helping to bring closure for the Bosnian people through truth and justice. The institutionalization of Srebrenica Remembrance Day every July 11 will help to inform future generations and assist all of us to work towards peaceful coexistence.”

After the fall of Srebrenica on July 11th 1995, Bosnian Serb forces, commanded by General Ratko Mladic (an indicted war criminal), and paramilitary units rapidly executed more than 8,000 Bosniak (Muslim) men, boys, and elderly, who had sought safety in the area. Moreover, approximately 30,000 people were forcibly deported in an UN-assisted ethnic cleansing. The European Parliament resolution referred to the Srebrenica Massacre as “the biggest war crime in Europe since the end of WWII.” This atrocity has been declared an act of genocide by the International Criminal Tribunal for the Former Yugoslavia. Both the United States House of Representatives and the United States Senate in 2005 have passed resolutions on the Srebrenica Genocide and all the atrocities that occurred during the war in Bosnia-Herzegovina between 1992 and 1995. The European parliament passed its resolution on January 15, 2009 institutionalizing July 11 as the day of Remembrance for the Srebrenica Genocide. This past March the Serbian parliament passed a resolution recognizing the 1995 massacre in Srebrenica.

“I would like thank and recognize the enormous effort, determination and perseverance of the Bosnian-Canadian community in bringing about this achievement today for Canada. This result in due to the endeavours of thousands of Bosnian-Canadians across the country lead by Emir Ramic, President of the Congress of North American Bosniaks-Canada, Imam Dr. Zijad Delic, Zeljko Milicevic, Chair of Justice for Bosnia Task Force, Senad Alicehajic, President of the Bosnian Club of Windsor, Leila Handanovic, Dina Bajric, and countless others. With this motion, the House of Commons joins Canada with many other countries in doing something that should have been done long ago,” Masse stated.

. The motion that passed in the House of Commons today:

“That, in the opinion of the House, the day of July 11 should be recognised as Srebrenica Remembrance Day in memorial of the Srebrenica Massacre of July 1995, in which more than 7,000 Bosniak men and boys were executed, declared an act of genocide by the international Criminal tribunal for the Former Yugoslavia and the International Court of justice, and 25,000 others were forcibly removed from their homes by Bosnian Serb forces.”