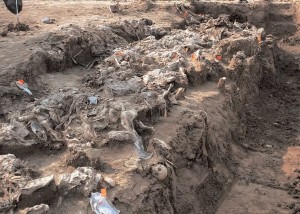 Just one hour after the International Criminal Tribunal for the Former Yugoslavia (ICTY) gave its verdict in the case of ‘Popovic et al.’, the director of the Bosnian Serb (RS) Center for the Research of War Crimes, Janko Velimirovic, chose to misrepresent the facts laid out in the judgement by informing the Serb public that the Tribunal had reversed its earlier finding that 8,000 Bosniaks had been massacred in the Srebrenica genocide. According to Velimirovic, the Hague Tribunal ruled that “ [Tribunal] dropped the claim of 7,000 to 8,000 Muslim victims.” (1) Velimirovic’s allegations are both incorrect and misleading.

What did the Judgement actually say?

In its summary of the verdict in the case of ‘Popovic et al.’, the Trial Chamber mentioned the figure of 5,336 “identified individuals.” The key word here is “identified”, which refers only to those victims of genocide whose remains have been properly identified by the International Commission on Missing Persons (ICMP) through forensic DNA analysis at a given time during the judicial proceedings in the ‘Popovic et al’ case.

In his statement, Velimirovic also failed to mention that the Trial Chamber’s judgement also included the following findings:

“In the Prosecution’s submission, the minimum number of persons that went missing or died following the fall of Srebrenica can be estimated to be 7,826 …. The Trial Chamber is satisfied beyond reasonable doubt that at least 5,336 identified individuals were killed in the executions following the fall of Srebrenica. The Trial Chamber also notes that the evidence before it is not all encompassing. Graves continue to be discovered and exhumed to this day, and the number of identified individuals will rise. The Trial Chamber therefore considers that the number could well be as high as 7,826.” (2)(3) [our emphasis]

On 26 March 2010, the ICMP stated in its press release that “of the 13,000 persons DNA identified in the context of BiH [Bosnia and Herzegovina], 6,414 were DNA identifications of persons missing from the 1995 fall of Srebrenica.” (4) This data was not available in time to be presented in court in the ‘Popovic et al.’ trial, because the closing arguments in that case were delivered on 15 September 2009.

In May 2010, the expert witness Dusan Janc testified at the ICTY in the trial of Zdravko Tolimir using the most recently updated version of the report compiled by the Office of the Prosecutor (OTP). According to the results of the investigation published in the latest OTP report, valid through the end of April 2010, “the number of identified Srebrenica victims has reached 6,557. There are still about 1,300 names on the list of the International Commission for Missing Persons whose remains have neither been recovered nor identified.” (5)

Furthermore, using advanced forensic DNA analysis, the International Commission for Missing Persons has concluded that “the overall high matching rate between DNA extracted from these bone and blood samples leads ICMP to support an estimate of close to 8,100 individuals missing from the fall of Srebrenica.” (6)

Three high-ranking Bosnian Serb military officials were found guilty and convicted for the Srebrenica genocide on 10 June 2010 by the United Nations war crimes tribunal. Four other defendants were convicted of other war crimes.

Ljubomir Borovcanin was convicted of aiding and abetting extermination, murder, persecution and forcible transfer of Bosniaks and, as a superior, of murder as a crime against humanity and as a violation of the laws of customs of war. He was sentenced to 17 years’ imprisonment.

Radivoje Miletic was found guilty of murder, persecution and inhumane acts against Bosniaks. He was sentenced to 19 years’ imprisonment.

Milan Gvero was found guilty of persecution and inhumane acts against Bosniaks. He was sentenced to 5 years’ imprisonment.

Vinko Pandurevic was found guilty of aiding and abetting murder, persecution and inhumane acts against Bosniaks. He was sentenced to 13 years’ imprisonment.