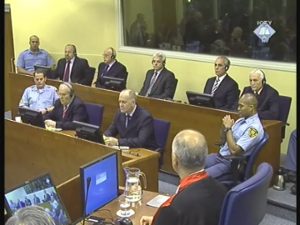 Seven former high-ranking Bosnian Serb military and police officials were today convicted by Trial Chamber II of a range of crimes committed in 1995 in relation to the fall of the enclaves of Srebrenica and Žepa, eastern Bosnia and Herzegovina.

Today’s judgement concerns the largest trial to date held before the Tribunal and deals with a wide range of crimes committed by the Bosnian Serb forces against Bosnian Muslims during and following the fall of the former UN protected zones of Srebrenica and Žepa in July 1995.

The Trial Chamber found that a widespread and systematic attack against a civilian population commenced with the issuance of a Supreme Command Directive in March 1995 by former Bosnian Serb President Radovan Karadžić in which he set out the criminal plan for an attack against protected UN safe areas aimed at forcing the Bosnian Muslims of Srebrenica and Žepa to leave the enclaves. It tasked the Drina Corps of the VRS to create “an unbearable situation of total insecurity with no hope of further survival or life for the inhabitants of Srebrenica and Žepa”.

“The scale and nature of the murder operation, with the staggering number of killings, the systematic and organised manner in which it was carried out, the targeting and relentless pursuit of the victims, and the plain intention—apparent from the evidence—to eliminate every Bosnian Muslim male who was captured or surrendered proves beyond reasonable doubt that this was genocide,” the Trial Chamber found.

Outlining their findings in relation to each of the accused, the Chamber first turned to Vujadin Popović who was found to be one of the major participants in the JCE to murder. He was found to have been present at a number of sites where captured Bosnian Muslims were detained or executed between July 13 and 23.

“Popović was not a marginal participant in the JCE to murder,” the Chamber found. “Popović knew that the intent was not just to kill those who had fallen into the hands of the Bosnian Serb Forces, but to kill as many as possible with the aim of destroying the group. Popović’s ensuing robust participation in all aspects of the plan demonstrates that he not only knew of this intent to destroy, he also shared it.”

Ljubiša Beara was the “driving force behind the murder enterprise”. The Trial Chamber found that he “had the clearest overall picture of the massive scale and scope of the killing operation. From his presence in Bratunac on the night of 13 July, to his personal visits to the various detention and execution sites and the significant logistical challenges he faced throughout, Beara had a very personal view of the staggering number of victims destined for execution.”

Furthermore, his vigorous efforts to organise locations and sites, recruit personnel, secure equipment and oversee executions all evidence his grim determination to kill as many as possible as quickly as possible, the Chamber found.

However, the Chamber found that, while he had no genocidal intent, he “participated in the JCE to Murder with persecutory intent, that he had with knowledge of the genocidal intent of others and that he made a substantial contribution to genocide.”

However, in relation to forcible removal, the Trial Chamber found, by majority, Judge Kwon dissenting, that with his presence in Potočari on 12 July and what he witnessed there, he knew that there was a forcible transfer of the civilian population of Srebrenica taking place. “With his knowledge of the intent of others as found by the majority, including discriminatory intent, Borovčanin’s acts in ordering his men to participate constituted a substantial contribution to the crime of forcible transfer,” the Trial Chamber found.

On 13 July 1995, Borovčanin was present at the Kravica warehouse were over 1,000 Bosnian Muslim men were detained. He saw about a busload of dead bodies in front of the warehouse and had sufficient information that his subordinates had committed the crime of murder. Borovčanin however failed to take the necessary and reasonable measures required to punish his subordinates.

After seeing the evidence of executions Borovčanin removed himself and his men from the Kravica warehouse as quickly as he could. The Chamber found that Borovčanin had the means to protect the remaining prisoners and knew that it was probable that the prisoners would be killed. His failure to protect them substantially contributed to the full-scale execution which later took place at Kravica Warehouse.

Having been involved in the drafting of the Supreme Command Directive, Radivoje Miletić had full knowledge from the early stages of “the common criminal plan to force the Bosnian Muslim populations from the Srebrenica and Žepa enclaves and he was instrumental in the plan being captured in writing for dissemination.”

Considering the scale and scope of the military attack on and the operations to forcibly remove the Bosnian Muslims from the enclaves, coordination from the Main Staff level was essential and Miletić was at the centre of this coordination.

The Chamber found, Judge Kwon dissenting, that based on Miletić’s level of involvement and his in-depth knowledge and broad overview of the massive operation in Srebrenica “it was foreseeable to him that murder would be committed in Potočari and that these murders would be committed with the specific intent to discriminate on political, racial or religious grounds.”

As one of the most senior officers of the VRS Main Staff, Milan Gvero played an important role in Srebrenica and Žepa operations. Like Miletić, Gvero was involved in the drafting of the Directive and thus knew of the plan to forcibly remove the populations from the Srebrenica and Žepa enclaves from its very inception.

During the Srebrenica and Žepa operations, Gvero carried out key functions relating to external propaganda and interaction with international organisations, with the aim to support the plan to forcibly transfer the populations from the enclaves by delaying any action by international forces that could frustrate the VRS’ plans.

He made a significant contribution to the JCE to forcibly remove the Muslim population from Srebrenica and shared the common intent.

While Pandurević was not a member of the JCE to forcibly remove, as Commander of the Tactical Group 1, Pandurević contributed to the plan to forcibly transfer the Bosnian Muslims from Srebrenica by taking part in the attack on 6 July, entering the city on 11 July. While Pandurević received information about the detentions, executions and burials in Pilica, Petkovci, Ročević, Orahovac and Branjevo Military Farm, there was no evidence to show that he participated, ordered, authorised or otherwise approved the participation of his subordinates in the murder operation.

However in relation to execution sites in Zvornik area, on 15 July Pandurević had reason to know that his subordinates were providing practical assistance to the execution of the Muslim detainees held there. The evidence before the Trial Chamber shows that Pandurević did not genuinely attempt to take any measures within his powers in order to prevent any further or continued participation of his subordinates in the murder operation.

The Trial Chamber also found that on 16 July Pandurević opened a corridor to allow passage of a column of Bosnian Muslims through Zvornik Brigade territory to the territory held by the 2nd Corps of the Army of Bosnia and Herzegovina, contrary to the orders he had received from his superiors. Thousands of men passed through this corridor. After the corridor was closed elements of the Zvornik Brigade searching the terrain for the soldiers of the ABiH located 10 wounded Bosnian Muslim men who were transferred from the Zvornik hospital to the clinic of the brigade.

Pandurević requested instructions from the Drina Corps regarding the wounded Bosnian Muslim prisoners in his custody and was informed that Popović would come to take them. On 23 July the wounded men were placed in Popović’s custody and the Trial Chamber found him responsible for their death. While Trial Chamber did not find that Pandurević possessed the intent to murder the ten men, the majority held – Judge Kwon dissenting – that Pandurević knew it was probable they would be murdered once they were transferred into Popović’s custody.

“By failing to intervene, Pandurević failed to discharge his legal duty to protect the wounded prisoners and therefore substantially contributed to the murder of these ten men,” the Chamber found.

This trial has been the largest conducted to date at the ICTY. Trial proceedings in this case commenced on 21 August 2006 and concluded on 15 September 2009. The trial took a total of 425 days during which the Trial Chamber heard or otherwise admitted evidence from 315 witnesses: 182 by the Prosecution; 132 by all the Defence teams and one by the Trial Chamber. There are 5,383 exhibits before the Trial Chamber, amounting to 87,392 page numbers.

The Tribunal has indicted a total of 21 individuals for crimes committed in Srebrenica. Among these are Radislav Krstić who was the first individual to be convicted of aiding and abetting genocide in Srebrenica on 2 August 2001. The Appeals Chamber sentenced him to 35 years’ imprisonment on 19 April 2004. The trials of Radovan Karadžić, Zdravko Tolimir as well as Jovica Stanišić and Franko Simatović are ongoing. To date, Ratko Mladić, the war-time leader of the Bosnian Serb Army also charged with genocide in Srebrenica, remains a fugitive.

Since its establishment, the Tribunal has indicted 161 persons for serious violations of humanitarian law committed on the territory of the former Yugoslavia between 1991 and 2001. Proceedings against 123 have been concluded. Proceedings are currently open for 40 Accused with 25 at trial stage and 11 before the Appeals Chamber.