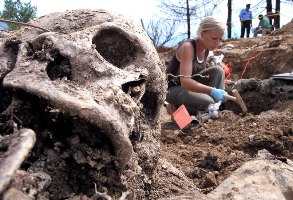 Congress of North American Bosniaks expresses support for the lawsuit against “La Nation”, a Swiss newspaper, for genocide denial which is prohibited by Swiss law. The lawsuit was jointly filed by the Bosnian branch of the Germany-based Society for Threatened Peoples as well as the Swiss Association against Impunity (TRIAL) in Lausanne.

The lawsuit was launched because of a series of articles that were published in “La Nation” in which they openly dispute the murder of more than 8,000 unarmed men and boys, instead referring to it as a “pseudo-massacre” claiming that it consisted of only a murder of 2,000 soldiers.

CNAB fully endorses prosecution and punishment to the fullest extent of the law for all those who deny acts of genocide, as defined by the United Nations charter in 1948. The facts around the Srebrenica genocide are undisputable and well documented, and will always remembered as one of the most shameful acts in human history. In July 1995, Bosnian Serb forces overran the enclave which was almost completely disarmed and designated as a “safe area” under the United Nations Protection Force (UNPROFOR). These facts were confirmed in several cases by the International Court of Justice (ICJ) and the International Criminal Tribunal for the Former Yugoslavia (ICTY). In 2004, in a unanimous ruling on the “Prosecutor v. Krstić” case, the Appeals Chamber of the ICTY ruled that the Srebrenica massacre was genocide. This ruling was also confirmed by the International Court of Justice in February of 2007 in the case of Bosnia-Herzegovina v. Serbia and Montenegro.

Serbian parliament recently issued a resolution in which they recognize the Srebrenica massacre as defined by the International Court of Justice, but failed to apologize or use the word “genocide”. CNAB considers this resolution insufficient, politically motivated, and insincere, not going far enough to apologize to the victims and renouncing all actions that encroach on Bosnia’s sovereignty and independence. Instead, Serbia continues to undermine all efforts for reconciliation by trying to equate the aggressors and the victims to the same playing field. This is evident in their arrest of Ilija Jurišić, a Bosnian patriot who participated in defense of Tuzla during the Serbian aggression on Bosnia as well as request for arrest of former Bosnian President Ejup Ganić. Serbia must at once accept full responsibility for their acts of aggression and stop distorting the truth and history. They should release Ilija Jurišić and retract all warrant arrest for Bosnian citizens who defended their country during the war.

On the other hand, CNAB is very encouraged by the recent actions of Croatia’s government including statements by former president Mesić, and most recently a visit by the current President Josipović who visited a memorial for Bosniak war crimes victims and apologized for Croatia’s divisive role in war in Bosnia.