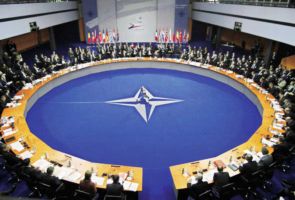 TALLINN (Reuters) – NATO ministers agreed on Thursday to grant a Membership Action Plan (MAP) for Bosnia that could see it join the alliance in coming years, but attached conditions to its implementation.

“MAP has been granted to Bosnia-Herzegovina today, but with clear conditions attached on implementation,” NATO spokesman James Appathurai told a news briefing after talks among NATO foreign ministers in the Estonian capital Tallinn.

Appathurai said NATO would accept Bosnia’s first annual reform plan under the program, only when defense property, such as bases, was registered as belonging to the state and for use of the defense ministry.

A Membership Action Plan is a multi-stage process of political dialogue and military reform to bring a country in line with NATO standards and to eventual membership. The process can take several years.

Bosnia applied for the membership plan for the 28-nation NATO in October, but the alliance declined this in December on the grounds it still needed to carry out more reforms.

Appathurai said the ministers noted that since December Bosnia had made “significant” progress on reform and they had welcomed its decision to destroy surplus ammunition and arms and to contribute troops to the NATO mission in Afghanistan.

“They remain concerned, however, that the defense property issue is not yet resolved,” he said.

Bosnia agreed this month to send an infantry unit to join the NATO-led mission in Afghanistan — one of the conditions NATO placed on Bosnia’s application.

Bosnia has united its rival ethnic armies that fought each other during the 1992-95 war and its NATO-sponsored defense overhaul is seen as the most successful reform in the country, which remains ethnically divided 14 years after the war’s end.

But Bosnia has lagged behind neighbors, all former republics of Yugoslavia, in progress toward EU and NATO membership.

Croatia joined NATO along with Albania last year and Montenegro was granted a membership plan in December.