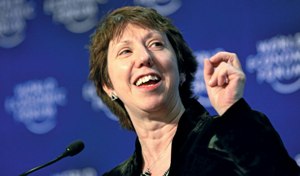 Press Release: CNAB welcomes remarks made the EU High Representative for Foreign Affairs Catherine Ashton related to the situation in Bosnia and Herzegovina

Congress of North American Bosniaks (CNAB) welcomes the report made by the EU High Representative for Foreign Affairs Catherine Ashton related to the situation in Bosnia and Herzegovina. Ashton warned that Bosnia is in danger of collapse because the key reforms necessary for peace and stability are being undermined by combative ethnic leaders, specifically stating that Republika Srpska (RS) has openly violated sections of the Dayton Accords and defied the authority of the Office of High Representative (OHR). She also said in the report that RS political leaders have openly challenged the integrity of BiH and talked openly of secession.

CNAB has, on many occasions pointed out the fact that the Republika Srpska had “openly violated” annexes of the Dayton Peace Agreement. We are very disappointed with lack of response to the current threats of referendum by SNSD (Milorad Dodik). There seems to be no fear of consequences for any actions by RS politicians from the OHR whose authority has been severely undermined by the lack of U.S. reaction to these threats. Milorad Dodik and RS representatives illegally made a referendum decision as a challenge to OHR and international authority. This is a clear violation of the Dayton Accord which gave specific authority of the OHR to ensure compliance. OHR no longer has adequate support from the EU and the U.S. to perform this duty. This is dangerous for Bosnia and threatens to roll back all of the U.S. efforts over the last 15 years. Bosnian Serb politicians are planning a court challenge of the current and previous High Representatives for abuse of power.

In our recent talks with the State Department representatives, we have emphasized the negative role that the Republika Srpska politicians supported by the Serbian government have played in destabilizing the Balkans.  In order for Bosnia to stay a viable and sustainable country, the United States and the European Union must do everything in its power to ensure concrete steps are taken towards full integration of Bosnia into NATO and the European Union.

This is a crucial time for serious and dedicated engagement of the United States and the European Union in Bosnia. The consequences of inaction will be dire, with so many of the same Serbian ultranationalist movements still operating in the region.