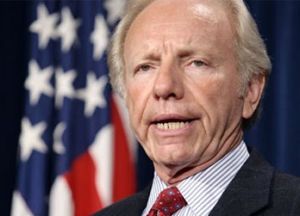 WASHINGTON — U.S. Senator Joseph Lieberman today criticized a move by the Bosnian Serb parliament to approve a law on referendums that could be used to call for secession from Bosnia.

The parliament of Republika Srpska voted on February 10 to approve the measure, which was strongly backed by Prime Minister Milorad Dodik. Dodik has repeatedly called for greater autonomy for the Bosnian Serb entity and has threatened to use a referendum to challenge the authority of Bosnia’s international monitors or even break with Bosnia’s Muslim-Croat half.

Either vote would violate the terms of the Dayton peace accords that ended the Bosnian War in 1995. They would also likely scupper talks on constitutional reforms meant to centralize Bosnia’s governing structures.

In an interview with RFE/RL, Lieberman expressed regret that Bosnian Serb lawmakers proceeded with the vote despite calls from Western officials to reconsider.

“This is very disappointing and alarming news from Republika Srpska,” Lieberman said. “It’s not totally surprising because Mr. Dodik has threatened this before. This is a nation that experienced genocide only approximately 15 years ago. Dayton ended a war, but it did not achieve yet a genuine solution to these problems.”

U.S. and EU officials are desperately trying to convince Bosnian officials to agree on a set of constitutional reforms that would unify the country and put it on a course to EU membership. Supporters argue it is essential to strike an agreement on the reforms well ahead of the country’s October elections.

Lieberman said the autumn vote will give Bosnians in both the Serb Republic and the Muslim-Croat Federation an opportunity to indicate “whether they want to go toward an orderly unified government and membership in the European Union, or back to division and conflict.”

Lieberman last week traveled to Bosnia with Senator John McCain to meet with members of Bosnia’s tripartite presidency, who called for greater Western involvement in resolving the country’s political impasse.

Lieberman today suggested that both the United States and the EU could create new posts with a special focus on Bosnia.

“I wonder whether the European Union and the United States ought now together to appoint special envoys to go back to Sarajevo to stay there and to try to bring the parties together,” he said. “Because the consequences of not doing so are very bad.”