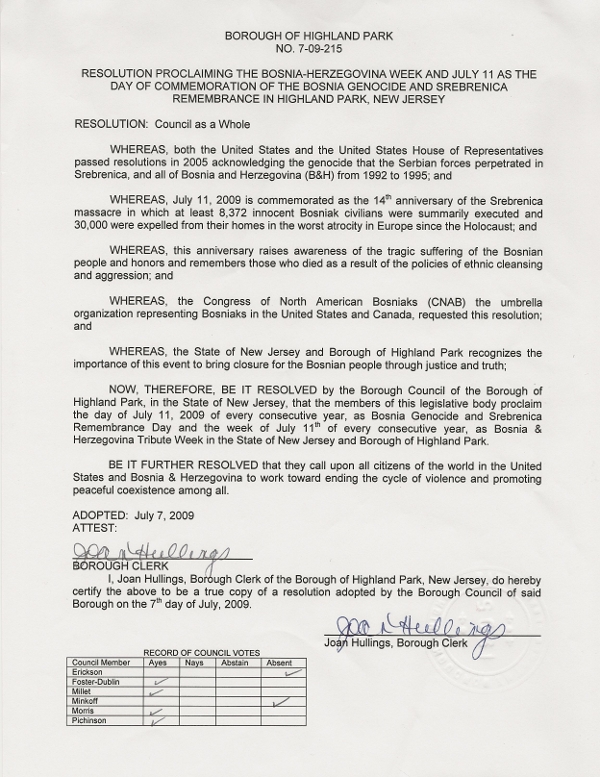 RESOLUTION PROCLAIMING THE BOSNIA-HERZEGOVINA WEEK AND JULY 11 AS THE DAY OF COMMEMORATION OF THE BOSNIA GENOCIDE AND SREBRENICA REMEMBRANCE IN HIGHLAND PARK, NEW JERSEY

RESOLUTION: Council as a Whole

WHEREAS, both the United States and the United States House of Representatives passed resolutions in 2005 acknowledging the genocide that the Serbian forces perpetrated in Srebrenica, and all of Bosnia and Herzegovina (B&H) from 1992 to 1995; and

WHEREAS, July 11, 2009 is commemorated as the 14th anniversary of the Srebrenica massacre in which at least 8,372 innocent Bosniak civilians were summarily executed and 30,000 were expelled from their homes in the worst atrocity in Europe since the Holocaust; and

WHEREAS, this anniversary raises awareness of the tragic suffering of the Bosnian people and honors and remembers those who died as a result of the policies of ethnic cleansing and aggression; and

WHEREAS, the Congress of North American Bosniaks (CNAB) the umbrella organization representing Bosniaks in the United States and Canada, requested this resolution; and

WHEREAS, the State of New Jersey and Borough of Highland Park recognizes the importance of this event to bring closure for the Bosnian people through justice and truth;

BE IT FURTHER RESOLVED that they call upon all citizens of the world in the United States and Bosnia & Herzegovina to work toward ending the cycle of violence and promoting peaceful coexistence among all.