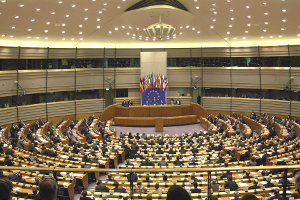 Honorable Members of the European Parliament,

The Congress of North American Bosniaks, an umbrella organization representing the interests of 350,000 American and Canadian Bosniaks, is deeply concerned over the continued human and religious rights violations of the state of Serbia against its minority ethnic groups, namely Bosniaks in the Sandzak region. The Serbian Ministry of Religion, headed by Mr. Bogoljub Sijakovic, continues to undermine the rights of the Bosniak minority by meddling in internal religious affairs of the Islamic Community in the Sandzak region. Their continued attempts to undermine these rights are evidenced by the fact they allowed and encouraged registration of a parallel „islamic community“ knowing that it would cause confusion and division among the already disenfranchised Bosniak minority.

This is further evidenced by the 2008 US Department of State’s Human Rights Report on Serbia, dated February 25, 2009: “During the year the Islamic community remained divided along political lines. One group aligned itself with a newly established local Riyaset in Belgrade, and the other retained its traditional ties to the Riyaset in neighboring Bosnia and Herzegovina. Both communities blamed the Ministry of Religion for the conflict within the Islamic community and for violating the law by allowing both communities to register.”

These events should also be understood in the historical context realizing that the Bosniak minority suffered various forms of violence, including kidnapping, abduction, intimidation, harassment, and destruction of their property most recently during the Serbian aggression on Bosnia and Herzegovina in the 1990s. Mr. Sijakovic was an open propagator of hatred and violence against Bosniaks and Croats during the war in Bosnia. He was involved in meetings with war criminals, including Radovan Karadzic, and openly called for murder and ethnic cleansing of non-Serb population in Montenegro. It is for this reason that Mr. Sijakovic cannot be trusted in such a high function within the Serbian government and should resign.

Furthermore, minorities continue to be disenfranchised in Serbia and are not provided the same socio-economic benefits as Serbs. This fact is also confirmed in the report from March 11, 2009, by the EU Commissioner for Human Rights, Thomas Hammarberg on his visit to Serbia in October of 2008, who noted the following: “The Raška region, predominantly inhabited by Bosniaks, suffers from a high level of unemployment and poverty as a result of a weak economy and low levels of investment. The problems are exacerbated by an illdeveloped infrastructure.

Other minority groups in the Sandzak region and the Albanians in Southern Serbia also find themselves in a difficult position owing to economic underdevelopment in these regions.

Article 14 of the Constitution provides that the Republic of Serbia shall protect the rights of national minorities and guarantee special protection to them for the purpose of exercising full equality and preserving their identity. Chapter 3, Article 76 protects national minorities against discrimination and Article 77 ensures an appropriate representation in public administration. Article 81 of the Constitution provides that in the field of education, culture and information, the state shall encourage a spirit of tolerance and intercultural dialogue and shall take effective measures to promote mutual respect, understanding and co-operation among all people living in Serbia irrespective of their ethnic, cultural, linguistic and religious identity. In practice, respect for and protection of minority rights appears to be inadequate.”

The Republic of Serbia has failed to defend the constitutional right of Bosniaks to full equality and right to preserve identity, including their rights to religious freedom. Instead of encouraging peace, dialogue, and economic prosperity for all people, Serbian government is purposely looking to cause division and keep the Bosniaks from achieving equal socioeconomic status.

Vice President Joe Biden, in his address to the Parliament of Bosnia and Herzegovina May 19, 2009 stated the USA wants to see Serbia play “a constructive role in the region.” This should begin by respecting the human and religious rights of minorities in Serbia, and mainly Bosniaks in Sandzak and the rest of Serbia.

The most recent plans of regionalization of Serbia, which includes plan to split Sandzak into two regions will further exacerbate the erosion of human, political and other rights of Bosniaks in Serbia. We request that any plans for regionalization of Serbia take into consideration the historic and political situation on the ground, and protect the interest of Bosniaks and other ethnic groups in Serbia.

We request that the members of European Parliament strongly condemn Serbia’s mistreatment of minorities, which are clearly in violation of the Stabilization and Association Agreement (SAA) signed on April 29, 2008 between EU and Serbia. The Congress of North American Bosniaks is confident that the European Parliament will uphold the values of basic human rights by demanding that Republic of Serbia confront its past human rights abuses as well as discontinue its current ones. It is only by holding Serbia accountable for its actions that there can be stability and prosperity in the Balkans and the rest of Europe.