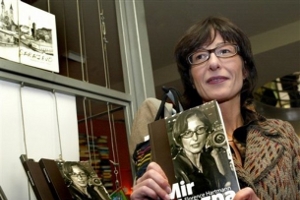 On behalf of North American Bosniaks, the victims of aggression and genocide, The Congress of North American Bosniaks (CNAB) recognizes that the rule of law requires that former spokeswoman of the International Criminal Tribunal for the former Yugoslavia (ICTY) Ms. Florence Hartman be investigated and potentially prosecuted in Court.  However, the fact remains that material evidence was withheld from a monumental court case related to the genocide orchestrated by Serbia against Bosniaks.

In her book, “Peace and Punishment” and her text “Hidden key documents about genocide” Hartman reveals that the Court excluded material evidence against Serbia from state archives. These incriminating documents were discussed only at closed sessions, and Serbia later prohibited minutes from those meetings to be used in the lawsuit of Bosnia and Herzegovina (BiH) against Serbia in front of the International Court of Justice (ICJ).

The decision of the Court regarding this evidence must also be investigated and charges should be brought in order for peace, the rule of law, and justice to be served.

This case shows, once again, the failures of the ICJ.  Ms. Hartman ‘s  texts   demonstrate  that ICTY and ICJ have  both secretly offered  protection to Serbia,  Montenegro, their leaders and state institutions, including their Serbian surrogates in Bosnia, their political parties and other organs and mechanisms, which are part of the Greater Serbia genocide project.

In the name of justice and truth, for those who are fighting for the victims of the biggest crime against humanity in the 20th century, CNAB considers the legal prosecutions of those who want to show the truth damaging for peace in the world.  CNAB is requesting that any legal proceedings against Ms. Hartman be matched with equally fervent legal proceedings against the ICTY and ICJ for the criminal act of withholding material evidence.

It is unfortunate that Ms. Hartman had no legal recourse to bring the truth to light. CNAB recognizes the need for the rule of law; however it will support Hartman’s defense wholeheartedly against the unjust accusations.