Skip to Content
Home English Sevdalinka: The echo of our souls, by Ivan Lovrenovic 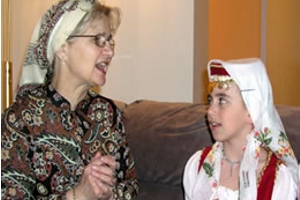 Like every authentic song, the sevdalinka lives truly only at the moment it is being sung, and lives in the manner it is sung – well or badly. There is something in the singing, in the execution of the sevdalinka that must not be spoiled, and if it does chance to be spoiled then all is transformed into intolerable banality.

This is why the sevdalinka should be sung only by someone who is able and knows how to sing it unspoilt, which today is unfortunately rare. One should bear in mind the short yet precise encyclopaedic explanation which runs:

‘The sevdalinka embraces a whole range of very different levels, from common bar song to exceptional achievements in melody, text and performance.’

Beauty and completeness are thus inseparable from its inner unity, composed not only of the melody and the text, but also of the actual performance. This indeed is the unity, rather forgotten today, which the language has deposited in a single word: pjesma [song/poem]. For a long time, in the centuries that were its own, this is indeed what the sevdalinka was called. It was only in order to distinguish it from other forms of singing that people used to say: ‘plain’ [poravna] song. The name sevdalinka, which today covers all manner of things, is not the autochthonous name of this song. That name is a bookish product which, following Edward Said, could be called ‘orientalist’, and it made its first public appearance in 1890.

Used in the scholarly sense, sevdalinka stands for a whole culture. A culture that today is practically gone. According to my sense of music, it began to decline historically when associated with the accordion, which killed it. With its voluminous and empty abundance of sounds, its fruitless virtuosity that soon infected also the singer, this European instrument is of itself incompatible with, and unfriendly to, the infinitely refined ellipticity and emotional grandeur – musical and poetic – of the true sevdalinka. There is no sevdalinka without a string instrument – that is its pentatonic soul.

Other things too have worked against the true sevdalinka over the past hundred years. Most of all its subsequent and artificial ‘orientalization’, which only too often directed it into the trap of ordinary kitsch, and which is experienced as an alien body within the musical and poetic composition of the true sevdalinka. We owe the genesis of this ‘orientalization’, paradoxically, to the Austro-Hungarian period with its novel urban fashions and styles. We find an analogy in the alleged ‘Moorish’ style upon which the new administration insisted in architecture. But whereas the Moorish style died with Austria, the oriental kitsch in the svedalinka has continued in its various transformations until the present day.

It is necessary to clarify: changes are not of themselves wrong. There are many examples in the world of popular, traditional musical-poetic expression being transformed in various but properly artistic ways, without losing the link with its original individuality. The contemporary world-music trend too, for all its high degree of commercialization and merciless industrialization, provides local traditions with unimaginable possibilities for positive transformation and global affirmation. Thus far the sevdalinka has had no such luck. It is only rarely and exceptionally that a new, authorial expression has harmonized intimately with the sevdalinka spirit, creating texts and melodies worthy of the model. This book has not neglected such examples either: you will find within it homages to Heinrich Heine (Kraj tanahna šardrvana [By the slender fountain] sung by Safvetbeg Bašagić), to Bašagić himself (Evo, ovu rumen-ružu [Here, this red, red rose]), to Osman Đikić (Akšam geldi [Dusk is falling]), and to the great folk artist Jozo Penava (Kraj Vrbasa sjedi momče [Beside the Vrbas sits a lad]).

The sevdalinka is by its origin the song of the Bosnian urban setting, created during the Ottoman period in the milieu of economically and materially better-off merchants and craftsmen. The milieu was indeed predominantly Islamic and oriental, and this song can be perceived in the main as an expression of Muslim lifestyle and culture. This interpretation loses its force, however, when it becomes ethnically determined. For, in the construction of the integral social and cultural character of the larger towns and smaller urban settlements, other ethnic elements (Catholic-Croat, Orthodox-Serb, Sefardic-Jewish, Roma …) took part in addition to Muslims-Bosniaks. They thus participated also in the creation, and especially in the performance, of the Bosnian lyrical song. Oriental-Asiatic elements did, of course, come to permeate this song, especially its musical structure, in the same way that they had also imbued all other aspects of the secular culture of non-Muslim ethnic communities in the Balkans and Bosnia (vocabulary, crafts, dress, culture of everyday life, certain aspects of mentality…). But the language, the poetic structure, the metre and generally the laws of verse formation, the type of sensibility, the symbolism, the imagination, the archetypes – all these elements of the Bosnian lyrical song have their origin in that cultural-traditional substratum which lies in the common, pre-Ottoman foundation of the Bosnian and Balkan-Slav folk inheritance.

Until quite recently the women of southern Hungary while husking maize sang the melancholy ikavian tune Vezak vezla lipa Kata [Fair Kata was at her needlework], which has the exactly same melody as the Bosnian song Vezla vezak Adem kada [Adem’s lady was at her needlework]. Sensing no doubt its whole documentary curiosity, the well-known Hungarian film director Peter Bacso recorded this scene in his cinematic masterpiece The Witness. These women from the area of Pécs are the descendants of Bosnian Catholic Croats who, at the end of the seventeenth century, in the wake of the Vienna War and the depredations of Eugene of Savoy, were obliged to flee Bosnia and settle in Hungary. In other words, they sing their own songs three hundred years after their ancestors left their old Bosnian homes, and after they have doubtless even forgotten the language. This ancient ‘plain’ song is based on a melodic form and structure more deeply embedded in memory than language itself, and which evidently owes nothing to the influence of oriental-Asiatic musical forms. It possesses an exceptional vitality, however, and has incorporated countless later texts/songs that are still sung today (Zaplakala stara majka Džafer-begova [Džafer-Beg’s aged mother wept], U Cazinu b’jela kula od tri tavana [In Cazin a white tower three stories high], etc. etc.), so that this kajda [melody] represents a ‘trade mark’ of the true sevdalinka.

Following the Vienna War (1683-99), there occurred a cataclysmic rupture in Bosnia’s social and ethnic structure, the depth of which is difficult even to imagine today. One of its consequences was a complete destruction of the urban layer of the country’s non-Muslim population. It took a whole century, or a century and a half, for this layer to begin to revive only in the nineteenth century. The old ‘community in song’ likewise started to be revived at that time. Along, of course, with many other musical influences that had arrived in the meantime. Thus, for example, Catholics from many small towns across the Vrbas in western Bosnia would flee to Dalmatia, remain there for a generation or two, and then return to their former homes, bringing with them a marked liking for a different, Dalmatian-Mediterranean style of singing.

Zaim Imamović was in our day the Yves Montand, Safet Isović the Mario Lanza of the Bosnian song, while Ksenia Cicvarić was let’s say the Amalia Rodrigues of that of Podgorica, coastal Ulcinj and the Sandžak: all three have their place among the stars. Sarajevo’s older inhabitants recall Jozo Kristić, about whose singing Zaim Imamović spoke to us with admiration one gloomy Sarajevo day in early 1993. My own feeling, however, is that the last complete performer of sevdalinke died with Hamić Mešanović, the singer and saz player, for whom it was a destiny rather than a profession.

As with every accursed singer of the blues, you could hear this in each of his husky, strident, ugly – and divine – chords! Of others whom I myself have heard, the nearest to this kind of rough perfection was the singing of Harija Mujkić-Halilović from Rika below the Glavica. On that same Glavica the girls from the Muslim mahala (quarter) used to sing on Varcar [Vakuf – now Mirkonjić Grad] summer evenings, and it was only much later that I recognized my childish enchantment with their song as a complete musical and experiential equivalent of the Spanish cante jondo or Portugese fado.

Although unlike anything else, the Bosnian sevdalinka (and its other Balkan-Slav variants) has its own civilizational context. This indeed is the context in which equivalents to the sevdalinka may be experienced in Sefardic romances, in Calabrian and Sicilian melodies, in cante jondo or in fado… These are melodies of fate, just as Federico Garcia Lorca wrote about the singers of Andalusia: that their dedication to the song is a fatal wager that their song can for a moment replace their real life.

The generation that was able to hear how the authentic sevdalinka actually sounded has probably died out. The contemporary sevdalinka, what remains of it, is reinforced with electric instruments, is sung everywhere and in every way, is sung by those who know how and those who do not. In gleaming TV studios, football stadiums and gigantic concert-halls, in disco-clubs and hotels catering for the new rich, its sounds are disseminated from every conceivable kind of transmitter, blare forth from the open windows of apartments and cars. Serious connoisseurs and aficionados, however, know full well that there is no true song without the akšamluk [evening company] and without rakija [brandy] made by a craftsman’s hand. That which smells of the plum, or more precisely the velvety blue dew shrouding the ripe fruit at dawn, pours benevolently through the stomach and the limbs, catches slowly and holds long, and fills the soul with a noble and disconsolate melancholy … And draws forth a song. The quiet, plain: Hey, Vrbas, cold water, bear away my sorrows…., or The wedding guests in their finery ride up the hill, the little hill at once addresses them… This is why the akšamluk, such songs and such singing are not entertainment or amusement, leisure or relaxation. The true akšamluk is a refined institution of everyday culture, and in its happy moments a serious reaching out for the summit of that experience in which a person recognizes within himself another being, more unhappy yet better than the one who lives daily within his skin.

This is that song ‘of our old town’ about which Antun Branko Š imić sang:

the sevdalinke, sad and painful and monotonous;

In them are the winter’s sadness and the summer’s laughter,

the echo of our hills, our wind’s voice.

When at dusk [akšam] the day fades behind the house…

And ever more sweetly down the yellow alleys

floats the sevdalinka melody as the echo of our souls.

If our folk art had created nothing other than the love songs called sevdalinke, that would be enough to give it its rightful place in an imaginary anthology of the world’s musical-literary heritage. Yet a full insight into its universal meaning and value is often prevented by the habit of viewing this exquisite lyrical corpus almost exclusively through the narrow prism of ethnicity and local folklore. Rarely has it had the good fortune to be examined in its complexity and totality, described and valorized where it belongs in the typological and literary-aesthetic sense. Namely, in the broadest context of South Slav and Balkan-Mediterranean folk poetry, trans-ethnic and even trans-linguistic yet fully related, as well as in the context of the supreme perfection of its lyrical form and expression. That is why this small anthology of the most beautiful sevdalinka texts finds its place in the ‘Dani Library’, quite programmatically and in company with the greatest literary works.