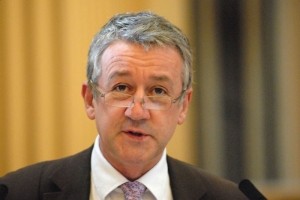 In the old days we would trot along to see Radovan Karadzic often. He would see us at the drop of a hat. He was affable, jocular, hugely confident that what he was doing was right. From time to time he would roll out his maps.

There were lines separating the Serb Republic (Republika Srpska) in Bosnia from the rest. There was a line through the heart of Sarajevo – these quarters for the Muslims, those for the Serbs. The term ‘ethnic cleansing’ was not invented by the foreign journalists he courted so warmly. It was how his own followers described what they were doing.

Republika Srpska is the land that Radovan built. Ethnic cleansing was the means by which he achieved it. Go back there today and you see, starkly, that while the ideologues and architects of the policy are, for the most part, behind bars, the foot soldiers of ethnic cleaning are still at large. They are still, in many cases, at their desks in the town halls and police stations across Bosnia.

Mirsad Tokaca runs Bosnia’s Research and Documentation Centre. It collates evidence of crimes committed during the 45-month war. He believes there are between 3,000 and 5,000 war criminals who should face prosecution. The Hague tribunal has restricted itself to a few dozen ‘big fish’ and has said it will issue no more indictments. Bosnia’s own state-wide war crimes court came into existence three years ago and has so far brought prosecutions against about a hundred people.

The local courts are supposed to prosecute local war criminals. They do not.

Bijeljina, in north-eastern Bosnia, is where it all started. On 31 March 1992, a paramilitary unit led by the feared Zeljko Raznatovic – known as Arkan – crossed the river from Serbia and unleashed a reign of terror. Civilians were shot dead in the street. Prominent Muslims were rounded up, and some of them murdered. The Muslim (Bosniak) population – tens of thousands of people – was driven out.

Eighteen years on, only a small proportion of those who were expelled have gone back, despite the legal right to do so. Saalem Corbo is one of the returnees. He remembers how Arkan’s men rampaged through the town. And, he says, they had local help.

Mirko Blagojevic, a Bijeljina Serb and head of the Serbian Radical Party in the town, formed and led his own paramilitary unit, according to evidence presented to the Hague tribunal. ‘He knew where the prominent Muslims in the town lived,’ says Mr Corbo. ‘He led Arkan’s troops to their houses so that they could be rounded up. Few of them survived.’

Jusuf Trbic is one who did survive. ‘Mirko Blagojevic came to my father-in-law’s house at 1600 on 1 April,’ he told me. ‘He was with Arkan’s men. They took me to Arkan’s headquarters and told me I had to make an announcement on local radio instructing all the Muslims to surrender their weapons. ‘But I didn’t know anything about weapons. They held me all night and beat me. ‘Ten times they took me outside and told me they were going to kill me. It was a terrible experience.’

Mirko Blagojevic is not a convicted war criminal. No case has ever been brought against him, far less proven. He is not hard to find. He has enjoyed a long career as an elected politician in the years since the war ended. He emphatically denied co-operating with Arkan’s men. He denied all the allegations made by Mr Corbo and Mr Trbic.

Branko Todorovic runs the Helsinki Committee for Human Rights in Bijeljina. He said only two war crimes trials had been brought by local prosecutors since the war ended – and both of these were against Muslims who had co-operated with Serb guards in a concentration camp. The Bijeljina courts, by the way, have jurisdiction over the Srebrenica area, where 8,000 Muslim men and boys were murdered in a few days in July 1995. ‘We live with the former war criminals, we see them every day in the streets,’ says Mr Todorovic.

Why does it matter?

The ethnic partition of Bosnia endures. The Dayton agreement of 1995 ended the war. But it divided Bosnia into two, ethnically defined entities – Republika Srpska and the Muslim-Croat Federation.

The leaders of Republika Srpska long ago abandoned their original dream of union with Serbia. They have accepted some of the symbols of Bosnian statehood – a common currency, a shared passport, a flag.

The one truly successful example of reintegration is – ironically – in the army, where former Muslim, Serb and Croat enemies now serve alongside each other. Beyond that, there is little that is truly Bosnian. The entities, not the Bosnian state, have real executive power. The Bosnian state barely functions. It is incapable of carrying out the reforms that Bosnia desperately needs.

And so as Croatia and Serbia continue their respective journeys to the European mainstream – to EU and possibly Nato membership – Bosnia, still broken, still paralysed, is being left behind, and is in danger of sinking further into corruption, poverty and organised crime. Look at Republika Srpska today and it is hard to avoid the conclusion that Radovan Karadzic got much of what he set out to get.