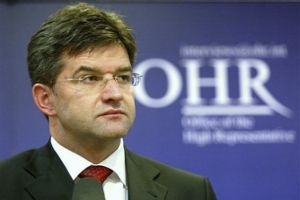 To the High Representative for Bosnia and Herzegovina,
To members of the Council for Implementation of Peace,
To members of international organizations

Serbia and her international mentors offer no hope that Ilija Jurisic will be freed. The Office of the High Representative, in a meting with representatives from Tuzla, in January of this year, has considered the case however, it has not resulted in any meaningful measures. Instead of applying pressure upon the high political circles in Serbia, including a threat to implement sanctions, it insists upon transferring of this case to the applicable Ministry of BiH, the OHR seems to be satisfied with offering but a verbal support to Jurisic.

The High Representative Miroslav Lajcak, given his function, ought to prevent any and all outside interference into internal matters of BiH. Interference, by the authorities of Serbia, has become so aggressive and frequent, that it, has, combined with the threats of the political leaders in the smaller BiH entity, morphed into a real danger with respect to the sovereignty, territorial integrity and independence of BiH.

This highly hypocritical approach by the international and European officials in BiH, who directly observe the situation as if to prepare BiH for inclusion into EU, only serves to encourage the domestic and foreign detractors of BiH. The best proof of that are the articles in the BiH and foreign press, about possible new arrests by Serbia of the citizens of BiH, in BiH, for their alleged crimes committed upon the Bosnian Serbs, in the way it was done with Jurisic. Hakija Meholjic, in his statement to Dnevni Avaz says: “I have left Srebrenica a week ago, as have some others, as we do not want to be shoved into the trunk of a car and taken to Belgrade.”

As the Bosniaks are discovering new mass graves containing severed bodies of their loved ones, the protagonists and followers of that same Serbian policy which committed those crimes are now acting like pirates across BiH, before the eyes of the world, trying to use their “hunt for the Bosnian and Herzegovinian criminals” so as to muddy up and minimize their crimes of aggression, genocide and grave violations of the international humanitarian law. With this obvious destruction of BiH, the authorities in Serbia and their agents and surrogates in the smaller entity not only discourage the return of the persecuted Bosniaks to their homesteads but also instill added fears among the few who have returned.

With the construction of a grandiose cross in the locality of Zlatista, above Sarajevo, as a memorial to the Serbs who perished in Sarajevo, the Serbs want to show their intention of dominance of an aggressive and genocidal policy which provokes conflicts and destabilizes the law and security in BiH and also harms the interests of Serbs in BiH. This is but an irresponsible act and abuse of the victims, as well as being political provocation invented in order to create tensions and definitive destruction of the state of BiH.

The High Representative, Miroslav Lajcak, with his statements of support to Milorad Dodik?s attempts to have the smaller BiH entity recognized as a lasting category without the constitutional prohibition for separation has ventured outside the boundaries of his acting in the interests of all citizens of BiH. It is both unacceptable and worrisome that Miroslav Lajcak evades using the Bonn Prerogatives with respect to the key reforms, but does not shy away, at the same time, from being a spokesman on behalf of the policy which has conferred aggression upon BiH and genocide upon Bosniaks. If the High Representative really aims for a European future and prosperity for the citizens of BiH then he ought to promote the constitutional solution of a lasting prohibition of separation of any of the entities of BiH, instead of publicly lobbying for creation of a legal framework which would serve as the cornerstone for the smaller entity to separate from, and disintegrate BiH.

Congress of North American Bosniaks (CNAB) calls upon the High Representative to apply pressure upon the political leadership of Serbia, including the threat of sanctions, insists upon transferring of the Jurisic case to an appropriate Ministry in BiH. CNAB will request that the state of BiH reintroduces into its Criminal Code the institution of due process ?in absentia?, which process was discontinued by the High Representative of BiH rendering it the only state in the region which is unable to prosecute “in absentia”.

CNAB, on behalf of the 350,000 displaced American and Canadian Bosniaks, victims of aggression and genocide, asks of Mr. Miroslav Lajcak, the Office of the High Representative, members of the Peace Implementation Council, members of international organizations, representatives of EU, UN, and the international community to clearly distance themselves from the political leadership of Serbia and that of the smaller entity, which jointly and persistently further their efforts of premeditated destruction of BiH.

CNAB invites the High Representative to commence, without delays, the implementation of the recommendations of the Peace Implementation Council, and to firmly confront the spreading of religious hatred in BiH. The High Representative ought to adequately respond to the humiliation of the Sarajevan and Bosnian-Herzegovinian victims of the Greater-Serbian fascism, with the only adequate response being removal from the functions of, and application of due process against, the persons who abuse religious symbols in order to spread national hatred with the aim of destroying the state of BiH.

CNAB invites the High Representative to focus upon his primary objectives in BiH, to strengthen the state of BiH and its open civil society, instead of seeing it as his duty to fortify the smaller entity in spite of the fact that the smaller entity, with respect to the Ruling of the International Court of Justice, was founded upon the crime of genocide.

President of the Governing Board
Congress of North American Bosniaks